The world economy is facing a tougher start to 2021 than expected as coronavirus infections surge and it takes time to roll out vaccinations.

While global growth is still on course to rebound quickly from the recession of last year at some point, it may take longer to ignite and not be as healthy as previously forecast. The World Bank already this month trimmed its prediction to 4% in 2021 and the International Monetary Fund will this week update its own outlook. 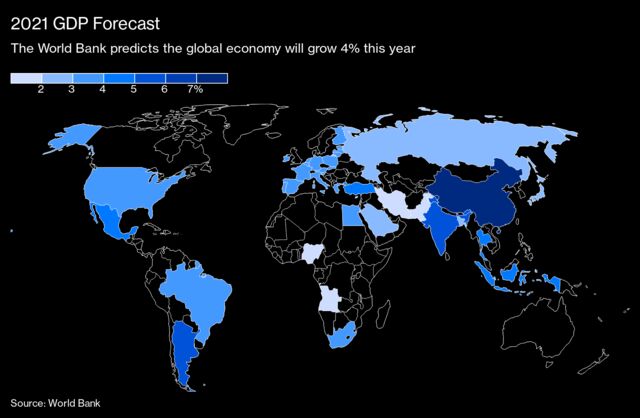 Double-dip recessions are now expected in Japan, the euro area and U.K. as restrictions to curb the virus’s spread are enforced. Record cases in the U.S. are dragging on retail spending and hiring, prompting President Joe Biden’s new administration to seek an extra $1.9 trillion worth of fiscal stimulus.

Only China has managed a V-shaped recovery after containing the disease early, but even there consumers remain wary with Beijing partly locked down.

High frequency indicators tracked by Bloomberg Economics point to a troubling start to the year with advanced economies beginning on a weak note and emerging economies diverging.

“That’s a reflection of the hard reality that, ahead of widespread distribution of the vaccine, a return to normality is an unlikely prospect,” said Tom Orlik, chief economist at Bloomberg Economics. 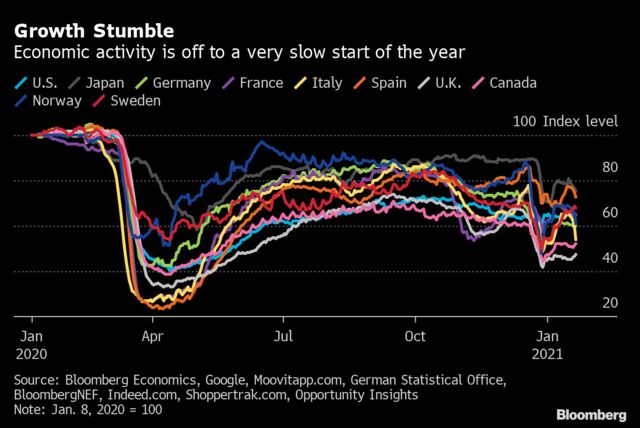 It’s a stark outlook facing policy makers after $12 trillion worth of fiscal support and trillions in central bank money printing failed to cement a recovery. Those from the Federal Reserve meet this week.

Even as the economic outlook has darkened as the weeks of 2021 ticked by, financial markets have continued to rally on optimism government stimulus and the vaccine roll out will drive a recovery. Global stocks hit an all-time high last week.

The unevenness is likely to feature in remarks by global leaders including Chinese President Xi Jinping, his French counterpart Emmanuel Macron and German Chancellor Angela Merkel and others who will speak at an online event the World Economic Forum is holding from Jan. 25 to Jan. 29 instead of its usual meeting in the Swiss ski resort of Davos. 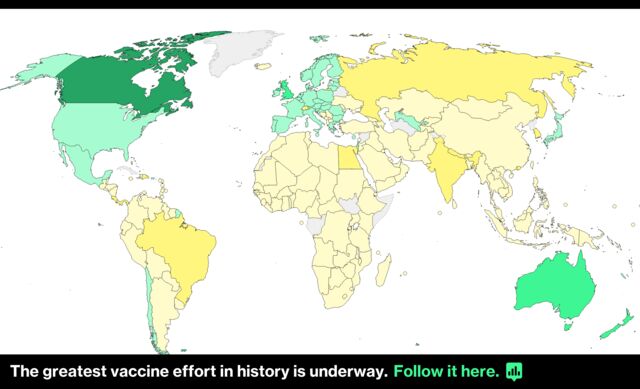 The U.S., Britain and European Union are delivering vaccines, setting up a scenario where some parts of the world reach herd immunitywhile others lag, especially poorer economies.

The World Health Organization will warn rich nations on Monday that their economies could be hurt unless they help developing countries speed up vaccination programs, the Financial Times reported on Sunday, citing a study.

If the rollout of vaccines in poorer countries maintains its current trajectory, advanced economies faces an output loss of up to $2.4 trillion of their annual gross domestic product before the pandemic because of distruptions to trade and supply chains, the WHO will say, according to the FT.

“While there is light at the end of the tunnel, there is still a long and difficult road ahead before we are out,” said Erik Nielsen, group chief economist at Unicredit SpA. “So long as the pandemic terrorizes part of the world, normality will not be restored anywhere.”

The optimistic outlook rests on authorities getting the vaccine out on a material scale by mid-year and neutering the threat of more transmissible variants of the virus. The ongoing provision of easy monetary policy and hope that governments won’t pull back their support prematurely as some did after the financial crisis should also assist. 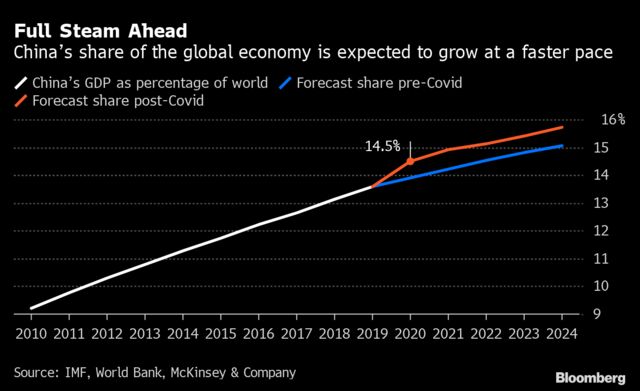 Lockdowns and other restrictions on movement also appear to be having less of a detrimental economic impact this time than last year as consumers and business have found ways to adapt. And China’s lead in the global recoveryshows what’s possible once the virus is controlled.

“The first quarter will be worse than we had thought,” said Shaun Roache, Asia Pacific chief economist at S&P Global Ratings in Singapore. “But we see a delayed, not derailed recovery.”