Eric Li’s factory making glass lampshades for companies including Home Depot Inc. is being stretched to its limits with sales doubling their pre-pandemic level.

But like many Chinese manufacturers, he doesn’t plan to expand operations — a reticence that could slow the pace of China’s economic growththis year and prolong a shortage of goods being felt around the world as demand picks up.

Surging prices of raw materials means “margins are compressed,” explains Li, owner of Huizhou Baizhan Glass Co. Ltd., in the southern Chinese province of Guangdong, which makes about $30 million in annual revenue. With the global economic recovery still uneven, “the future is very unclear, so there is not much push to expand capacity,” he adds. 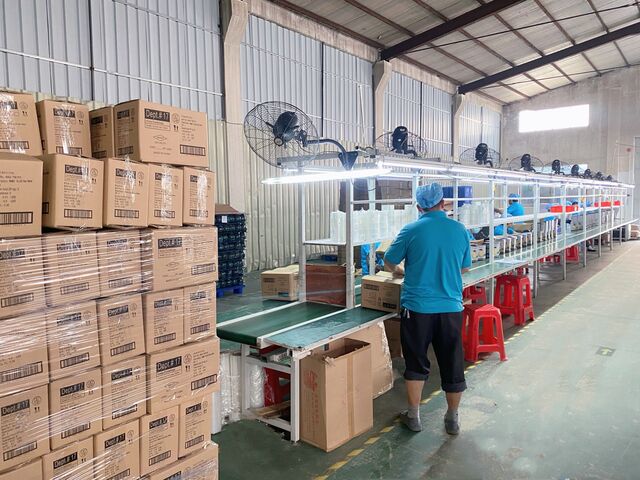 The combination of higher input prices, uncertainty about export prospects and a weak recovery in domestic consumer demand meant Chinese manufacturing investment from January to April was 0.4% below the same period in 2019, according to official statistics (comparing to 2019 strips out the distortion of last year’s pandemic data).

Due to the vast size of China’s manufacturing sector, that poses a risk both to the nation’s growth — which is currently predicted to reach 8.5% in 2021, according to a Bloomberg tally of economists’ estimates — and to a global economy that’s grappling with supply shortagesand rising prices.

Weaker-than-expected investment could have a “sizable” impact on GDP growth this year, said Citigroup Inc.’s China economist, Li-gang Liu. Lower investment may dent imports of capital goods and equipment from developed economies like Japan and Germany, “which in turn could drag their economic recovery and rebound as well,” he added.

AnHui HERO Electronic Sci & Tec Co. Ltd. is one of those companies feeling the squeeze. Based in the eastern province of Anhui, the company manufactures capacitors used to make electronic circuits, with sales mainly in the domestic market. Jing Yuan, the founder, says orders are up as much as 30% year-on-year, but profits are down 50% due to increasing materials costs that are not easily passed onto clients.

The company is under “huge cash pressure” as it needs to pay half a month in advance of delivery in order to secure copper and other metals, which they previously paid for months after receiving, he said. “The commodity issue has to be addressed by the government,” he added.

Chinese industry is absorbing significant cost pressures from rising commodity prices — damping the inflationary impact for the rest of the world. Will it last? Our analysis of gross margins suggests it could for a while longer: downstream industries — where the cost crunch is most severe — still have a small cushion.

Input shortages mean some manufacturers aren’t able to make use of their existing facilities, so expansion would be of little use. Chinese electric vehicle maker Nio Inc. suspended production at one of its factories last month, due to a shortage of microchips.

Modern Casting Ltd., which makes iron and steel products in Guangdong, issued a note to clients this month saying it would not be able to meet its current orders due to high raw material costs. A member of staff who answered the phone at the company’s office confirmed the note, but declined to give further details.

On top of the higher input costs, Chinese companies face a bumpy transition toward domestic consumer spending to sustain its post-pandemic recovery.

Exports, China’s strong-suit last year, may begin to slow as vaccine roll-outs cause consumers in wealthy countries to shift spending back to services. Meanwhile, the growth rate of Chinese consumer spending has yet to fully recover.

Investment sentiment among Chinese small and medium-sized enterprises is below levels seen even in 2018-9 when uncertainties from the U.S.-China trade war were a brake on expansion plans, according to a regular survey of more than 500 Chinese companies by Standard Chartered Plc.

“Demand is still mainly underpinned by exports, so domestic companies are aware that this is not sustainable,” said Standard Chartered’s China economist, Lan Shen. 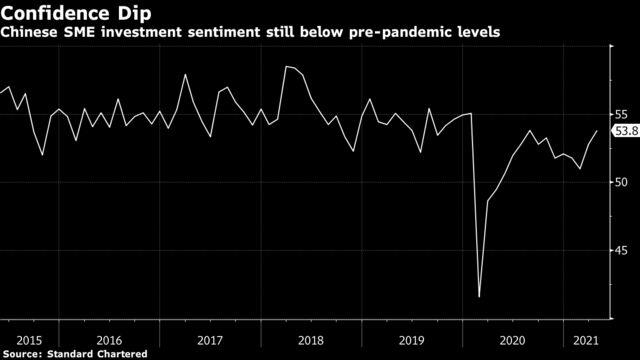 While some export-oriented sectors have been pushed to their limits, large amounts of slack remain for manufacturers targeting Chinese consumers due to subdued domestic demand.

Retail sales growth was 4.3% in April on a two-year average basis, which strips out base effects from the pandemic, less than half pre-pandemic growth rates. Overall capacity use at China’s manufacturers fell to 77.6% in the first quarter from 78.4% in the previous three months, with the automotive sector hit hardest by overcapacity following three years of declining sales volumes. 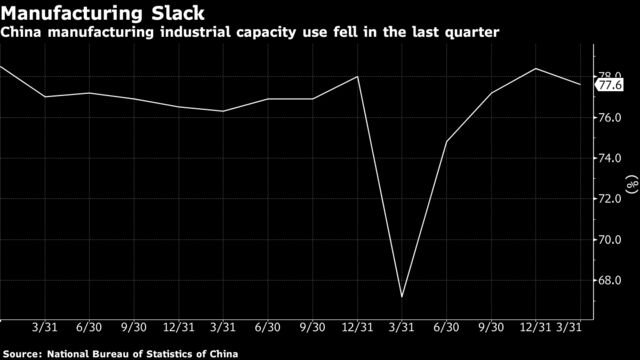 Even for electric vehicles whose sales are surging, most companies have already built their capacity and will now focus on incremental upgrades. “The majority of the investment has been done,” said Jochen Siebert of JSC Automotive Consulting.

China ordered state-owned companies to expand last year, with their investment growth of 5.3% in 2020 from the prior year easily outstripping the 1% increase in private investment. But for a sustainable pick-up in investment, the market, not the state, needs to feel confident.

Carsten Holz, an expert on Chinese investment statistics at the Hong Kong University of Science and Technology, estimates that privately-owned companies have accounted for 87% of manufacturing investment in 2015, the most recent year of available data. They are more sensitive to input costs.

“There is a pandemic plus insecurity about future trade given a new U.S. administration, neither of which is conducive to investment that relies on long-term growth prospects,” Holz said.

Transport bottlenecks are also a challenge for export-oriented manufacturers. Gordon Gao, who exports gardening products from China, said that he has had to reject 80% of orders this year due to port delays. In one case, an order placed before mid-February could only be shipped three months later when a client finally secured a container.

Beijing has tried to improve conditions for private companies by ordering a crackdown on speculation to curb commodity prices and easing access to bank loans.

Yet the government continues to gradually withdraw fiscal and monetary stimulus measures introduced amid the pandemic last year. It set a relatively unambitious target of “above 6%” growth for this year, and the Communist Party’s Politburo signaled last month it would prioritize reforms to control house prices and debt growth.

“The policy stance has definitely shifted away from supporting growth and back toward de-risking the financial sector,” said Adam Wolfe, an economist at London-based Absolute Strategy Research. “The risks for economic growth seem tilted to the downside, especially for capital-intensive, construction-linked sectors.”

For manufacturers such as Li, a longer period of domestic growth and control over input prices will be needed before capacity expansion is on the cards. While his company of 200 workers took on new permanent staff before the pandemic, for now he’d rather pass the risks of investment on to others.

“I wouldn’t do that now, I would rather hire some temporary workers and outsource the rest,” he said.