U.S. Retail Sales Jump by Most Since March, Topping Forecasts

U.S. Retail Sales Jump by Most Since March, Topping Forecasts

U.S. retail sales rose in October for a third month, signaling households continue to spend even with the fastest inflation in decades.

The median estimate in a Bloomberg survey of economists called for a 1.4% advance in overall retail sales. Stock futures wavered while the 10-year Treasury yield fluctuated and the dollar was little changed. 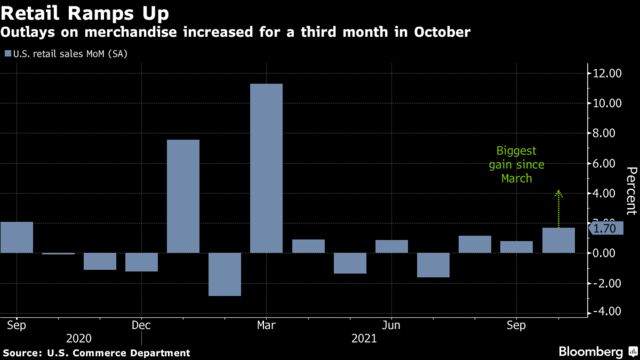 The broad-based gain in spending highlights how elevated savings and rising wages have helped Americans sustain a robust pace of merchandise spending. Though total retail sales are well-above pre-pandemic levels, a recent inflation-driven collapse in consumer sentiment risks a future tempering in demand.

U.S. prices are rising at the fastest pace in 30 years as businesses pass on growing labor and input costs to customers, but it’s hard to tell just how much that’s impacting demand since the figures aren’t adjusted for inflation. Inflation-adjusted consumer spending data for October will be released next week. 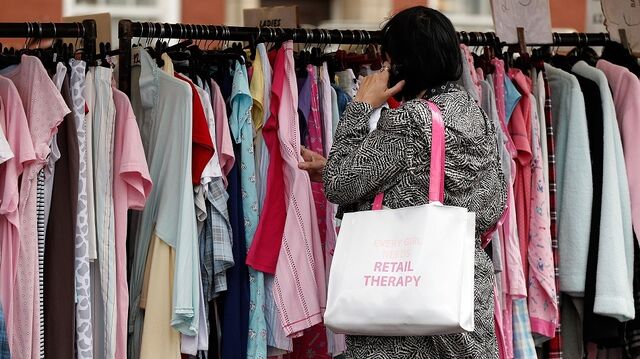 According to the Commerce Department’s report, 11 of 13 categories registered sales increases. Electronics and appliance stores saw a big surge in sales, as did building materials stores and non-store retailers, which include e-commerce.

The larger-than-forecast gain may also reflect the pulling forward of holiday shopping as gift-buyers race to beat shipping delays.

Motor vehicle and parts dealer sales rose 1.8%. Receipts at gasoline stations jumped 3.9%, the most since March, reflecting how Americans are paying some of the highest prices at the pump in seven years.

Restaurant and bar receipts, the only services category in the report, were little changed from the prior month following a subdued gain in September, underscoring the persistence of the pandemic.

The report suggests fourth-quarter consumer spending growth is off to a good start. Personal consumption slowed sharply in the third quarter as shortages, transportation bottlenecks, rising prices and the delta variant weighed on spending. Economists expect consumption to accelerate in the final three months of the year amid an improving labor market and health situation.