A surprise high for April’s CPI dents but does not destroy the transitory inflation thesis. Close to 60% of the month-over-month increase came from five components — used cars, rental cars, lodging, airfares, and food away from home — that will have little staying power.

Transient does not mean one month. As supply shortages run up against aftershocks from fiscal stimulus, and the base for comparison remains low, the CPI will continue to run hot into the summer. The impact of the Colonial pipeline shutdown on fuel prices will also have to be monitored closely.

The Fed has signaled that it views price pressures as temporary and is determined to look through them. Despite the surprise high in April’s CPI, Bloomberg Economics’ examination of the details suggests that view will stay intact.

The wild card would be if inflation expectations become unmoored — the next read on that will come from the University of Michigan sentiment survey due Friday. In the context of significant labor market slack, evidence of unmooring would have to be clear and significant before the Fed considers shifting its stance.

More Than Just Base Effects

While base effects likely reached their peak in April, contributing heavily to the year-over-year spike in core inflation, they are not the only reason behind the April surge. A useful approach to filter out intra-year gyrations and strip out base-effect disruptions is to look at shorter rates of change, such as a 3- or 6-month annualized (shown in the figure below).

Sharp accelerations in both the 3-month annualized rate (5.6% vs. 1.9% prior) and in the 6-month annualized rate (3.3% vs. 1.5% prior) than in the year-over-year comparison implies powerful drivers beyond base effects have emerged. These factors stem from the economy reopening and severe supply shortages. Both are being treated by the Fed as transient in nature and should subside as the year progresses.

Inflation Spreads Beyond Base Effects 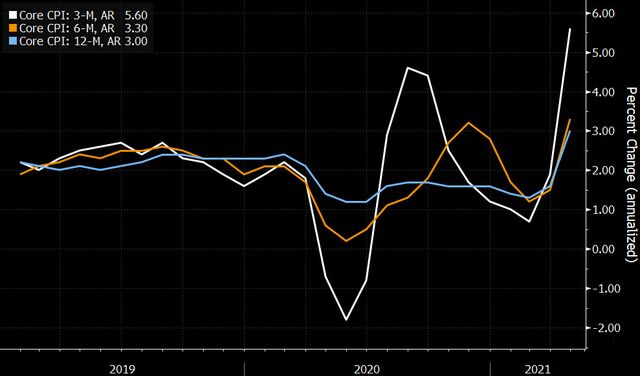 The details of the April report show economic reopening is entering a more mature stage. A pickup in price growth at restaurants (0.3% vs. 0.1% prior), lodging away from home (7.6% vs. 3.8%), as well as airfares (10.2% vs. 0.4%) demonstrate how lifting lockdowns strengthened demand for services as of late.

A temporary shortage of available workers in customer-facing industries will keep these prices elevated at least through the summer months. Some of these pressures will be alleviated as soon as September, when augmented unemployment benefits are set to expire and more school districts reopen, allowing for higher labor-force participation.

Despite a number of categories significantly accelerating, the April report also shows that these increases remain isolated to areas well-understood to be the result of acute supply-demand imbalances, along with items likely to recover after significant weakness.

Excess labor slack and long-running disinflationary trends in place prior to the pandemic would in that case work to restrain overall price appreciation after the reopening impulse subsides. Indeed, the lack of acceleration in medical care services (0.0% vs. 0.1% prior), personal care (0.2% vs. 0.6%), and one of the biggest CPI components — rent of shelter — support this view. Both OER and primary residential rents showed no acceleration, rising steadily at 0.2% in April.

Jump in Used Car Prices Accounts for Third of Gain

Semiconductor shortages restrained new vehicle production in February and March, adding to downward pressure on inventories that had already emerged in 2020 after broader Covid-related plant shutdowns. Coupled with higher demand — stimulus checks, and shifted habits including households wary of returning to public transit — the market for used vehicles also heated up sharply in 2020. The latest gain in April amounted to 10% month-over-month in the CPI, catching up to alternative measures including the Manheim Used Vehicle Value Index, which had shown larger gains previously.

The chart below shows the degree of concentration in goods prices in April, excluding food and energy. It shows the contribution of core goods prices to the headline CPI, with vehicles dominating. Isolated upward pressure is evidence the broader pickup is largely transitory, a view that nevertheless needs to be tested as recovery progresses. 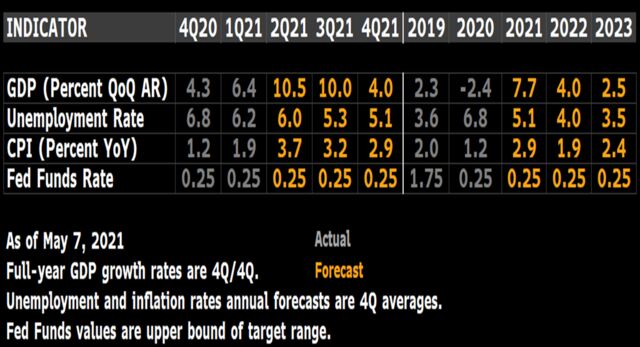