U.S. INSIGHT: Fed Tapers, Then What? Modeling the Impact

U.S. INSIGHT: Fed Tapers, Then What? Modeling the Impact

A roaring U.S. recovery, the highest inflation since 2008 and a historical low for real yields make strange companions. Bloomberg Economics’ analysis suggests that it’s a combination of Federal Reserve asset purchases and continued uncertainty about the outlook that’s depressing U.S. yields, opening the possibility of a marked increase in the months ahead as the Fed begins its taper and delta variant concerns ease.

For Bloomberg Intelligence analysis on U.S. rates click here. For more from Bloomberg Economics on the U.S. outlook click here.

Quantitative easing works by depressing long-term yields. As yields fall, easier financial conditions, a shift of investments into risk assets, and a weaker dollar all boost activity in the real economy. At present, Bloomberg Economics’ analysis suggests QE may be working almost too well — contributing to historically low real yields.

The yields on 10-year U.S. Treasuries is currently at around 1.3%, down from 1.5% in January 2020. That’s despite GDP growth of 6.5% in the second quarter and a CPI running above 5%. This development has brought down real yields to historical lows of about -1% in August. 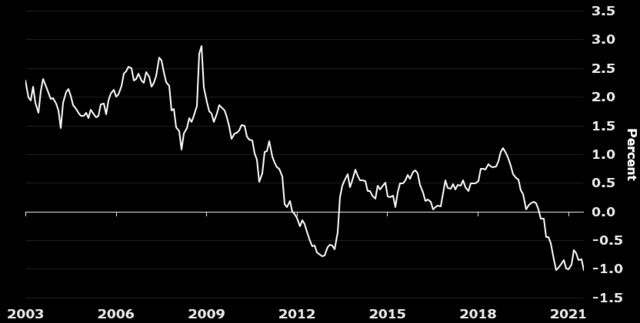 To explain why yields are so low despite strong growth and high inflation, we estimate a structural Bayesian VAR model:

The results show that economic conditions — including robust demand and limited supply — are adding upward pressure to yields. But that is being more than offset by a combination of a lower natural rate of interest, the Fed’s asset purchases and uncertainty about the outlook.

An important takeaway from our analysis: the combination of the looming Fed taper and — hopefully — end of pandemic-era uncertainty could well prove a game-changer. As a crude extrapolation of our results, if asset purchases and uncertainty were not a factor, the model suggests yields would be 1.8%.

Our approach builds on a paper by Wheale and Wieladek (2016). In particular, we use a structural Time-Varying Parameter Bayesian VAR model integrating five monthly time series. The VAR includes two lags, which has become standard in TVP-VAR models (Lubik and Matthes 2015). It is estimated with Bayesian methods, given the relatively high number of variables and short sample sizes.

We amend the model slightly, by assuming time-varying parameters and stochastic volatility. We also choose a slightly different set of variables: (1) for inflation, we use the log of PCE; (2) for activity, we use the log of monthly GDP, estimated through our nowcasting methodology; (3) for asset purchase announcements, we use a narrative based on Fed communication; (4) for bond yields, we use the 10-year Treasury yield; and (5) for equities, we use the S&P 500 Index.

The model is estimated over the sample from January 2009 to June 2021.

Structural identification is achieved by means of a combination of sign and short-term zero restrictions in the spirit of Arias et al. (2019). In particular, as in Wheale and Wieladek (2016), we identify four structural shocks:

Source: Bloomberg Economics, inspired by the identification scheme in Wheale and Wieladek (2016)

Björn van Roye is a Senior Global Economist for Bloomberg Economics in Frankfurt. He previously worked as a Team Lead Economist at the European Central Bank and a Research economist at the Kiel Institute for the World Economy. He is author of several macroeconomic models and tools such the “ECB-Global model for spillover analysis” and the “BEAR toolbox” for estimating Bayesian VAR models.