By Olivia Rockeman and Sarina Yoo

Forecasters raised their estimates for the consumer price index and for a key inflation gauge favored by the Federal Reserve, known as the personal consumption expenditures price index, every quarter through the first half of next year, according to the latest monthly surveyof economists by Bloomberg. 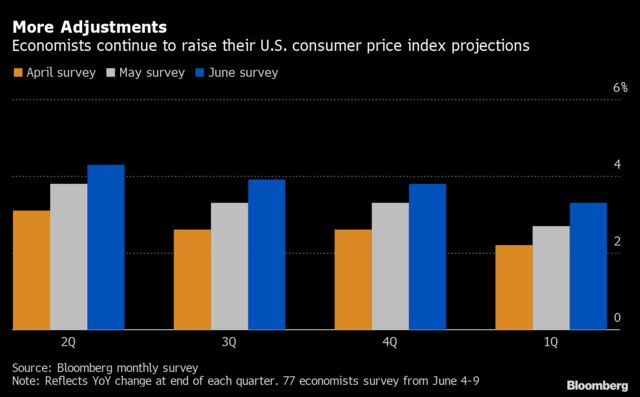 Compared to a year earlier, the CPI is now forecast to remain above 3% through March 2022, peaking at a 4.3% year-over-year gain in the current quarter, according to the median forecast in a June 4-9 survey of 77 economists. Data out Thursday showed the gauge rose more than expected for a third straight month.

The PCE price index is expected to rise 3.5% in the April to June period, up from the 3% estimate in the May survey and well above the Fed’s 2% goal. While rising fuel prices may in part help explain the upgrades to inflation, metrics excluding food and energy are also being adjusted higher.

Faced with a surge in demand, supply bottlenecks and rising input costs, many businesses have raised their prices to protect their profit margins. Whether those increases will lead to a more persistent inflationary trend has divided economists and market participants.

“Supply capacity should eventually catch up, but this could take time with the risk that we see more elevated inflation readings for longer than we have experienced at any point in the past 20 years,” said James Knightley, chief international economist at ING.

Fed officials have repeatedly said they expect the price pressures to prove temporary. As a result, they’ve given no indication that they’re ready taper bond purchases or raise rates in the foreseeable future.

So far, economists surveyed by Bloomberg also appear to see the pop in prices as somewhat temporary. Expectations for annual gains in both CPI and PCE are holding near 2% in the second half of next year.

Economists also boosted their outlook for gross domestic product growth for the rest of this year, but the reasons for the upward revisions differ by quarter. GDP is now projected to grow 10% in the second quarter, driven by stronger consumer spending than originally projected last month.