U.S. Housing Starts Rose to Fastest Pace Since 2006 in December

U.S. Housing Starts Rose to Fastest Pace Since 2006 in December

U.S. home construction starts rose for a fourth-straight month in December to the best pace since late 2006 as builders responded to the robust demand for single-family housing.

Residential starts climbed by 5.8% to a 1.67 million annualized rate, according to government data released Thursday. That topped all estimates in a Bloomberg survey of economists that had a median forecast of 1.56 million and compared with an upwardly revised 1.58 million rate in November. 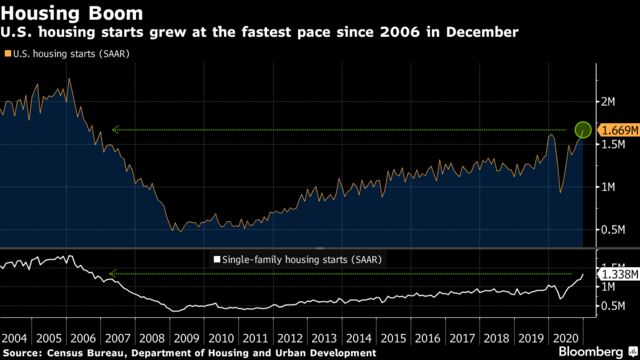 The full year saw a total of 1.38 million starts, with single-family construction climbing to 991,200, both the highest since the mid-2000s, according to the report, which is published jointly by the Census Bureau and the Department of Housing and Urban Development.

Meanwhile applications to build, a proxy for future construction, increased 4.5% in December to a 1.71 million annualized rate that was also the best since 2006.

The pandemic has also driven a surge in demand for larger properties with more space for families to work and learn at home. With lean inventories, builders have been rushing to meet demand. A measure of homebuilder sentimenteased in January, but remains near a recent record.

The report showed single-family starts climbed 12% to a 1.34 million pace, another post-2006 high. Multifamily starts, which tend to be volatile and include apartment buildings and condominiums, eased to 331,000.

While housing has been strong, the labor market has struggled to recover. A separate government report showed Thursday that initial filings for state unemployment benefits fell only slightly last week and remained elevated at 900,000 in the week ended Jan. 16.

–With assistance from Michael Sasso.

To contact the reporter on this story:
Reade Pickert in Washington at [email protected]