U.S. consumer confidence rose in October for the first time in four months as concerns around the delta variant eased.

The Conference Board’s index advanced to 113.8 from an upwardly revised 109.8 reading in September, according to the group’s report Tuesday. Economists in a Bloomberg survey had called for a drop to 108.

The data suggest that a recent drop in new Covid-19 infections is beginning to boost consumers’ outlook for the economy. That said, higher prices for household goods could hold back further improvement in sentiment in the coming months. 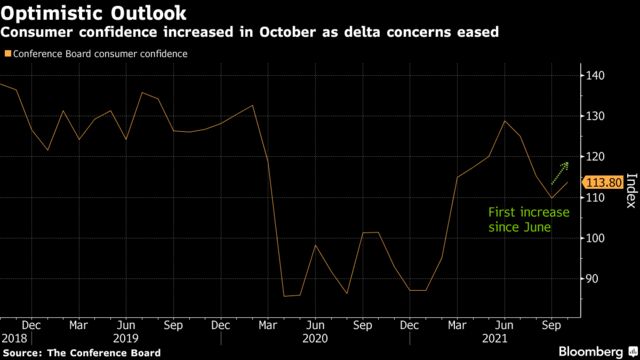 “While short-term inflation concerns rose to a 13-year high, the impact on confidence was muted,” Lynn Franco, senior director of economic indicators at the Conference Board, said in a statement. “The proportion of consumers planning to purchase homes, automobiles, and major appliances all increased in October.”

The Conference Board’s measures of both current conditions and future expectations rose slightly.

Consumers were more optimistic about their future income and job prospects. The share of consumers who said jobs were “plentiful” fell slightly, but remained near a pandemic high.

Consumers said they were more likely to purchase cars, homes and appliances. Vacation plans, which are reported every other month, also increased.

The figures come ahead of Thursday’s report on U.S. gross domestic product, which is currently forecast to show personal spending grew at a 0.8% annualized pace in the third quarter, compared with 12% in the three months through June.