Silicon Valley has the lowest office vacancy rate in the U.S., even as technology companies embrace remote work.

Vacancies in the region south of San Francisco hit 11% in the first quarter, including space available for sublease, according to a report by brokerage Jones Lang LaSalle Inc. That put Silicon Valley at the bottom of a list of more than 50 places in the U.S. 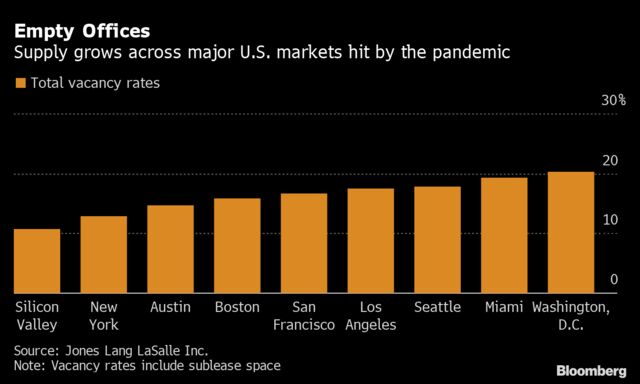 Silicon Valley, the capital of the technology industry, went into the pandemic with little available office space. Companies so far have been paying the rent and holding onto their space even with most workers at home.

“It suggests the tech companies plan to continue to hire and, one way or another, have a pretty high percentage of their population back in the building,” said John Gates, chief executive officer of Americas Markets for JLL.

Major office markets have been hit hard over the past year. Companies have been re-evaluating how much space they need for workers, and some have put offices on the market as subleases.

New York’s office availability is the highest it’s been in at least 30 years, while San Francisco is also struggling. Still, vaccines have companies talking about getting back to the office, with some targeting September for a return.

Google is opening some of its U.S. locations this month and has said it expects workers to eventually be at the office at least part of the week.

Manhattan-based developers, meanwhile, have been boosting investments in tech-friendly cities outside of New York. Tishman Speyer, the owner of Rockefeller Center, recently expanded its Silicon Valley presence with the purchase of an office campus in Sunnyvale.

In New York, the vacancy rate was 13% in the first quarter, while both Seattle and San Francisco were above 16%. Marketed rents in New York, San Francisco and Silicon Valley were the highest at $82.30, $82.16 and $60.57 per square foot, respectively, according to JLL.

Silicon Valley is more suburban than markets such as San Francisco or New York, meaning it might not have to fight as hard to lure workers back. Still, the area may face increased vacancies as supply grows. Two new developments recently hit the market without tenants, according to JLL.