By Olivia Rockeman and Reade Pickert

An unexpected jump in U.S. wages has given financial markets a new reason to worry that higher inflation may be here to stay.

Consumer prices are rising quickly as the economy reopens after the pandemic. A closely watched data release on Thursday is expected to show prices rose another 0.4% in May — pushing annual inflation above April’s 4.2%, already the highest in more than a decade.

Many policy makers and economists see the price spike as temporary –- partly because they haven’t been anticipating much in the way of wage growth, which has been relatively stagnantfor years at the lower end of the pay scale. 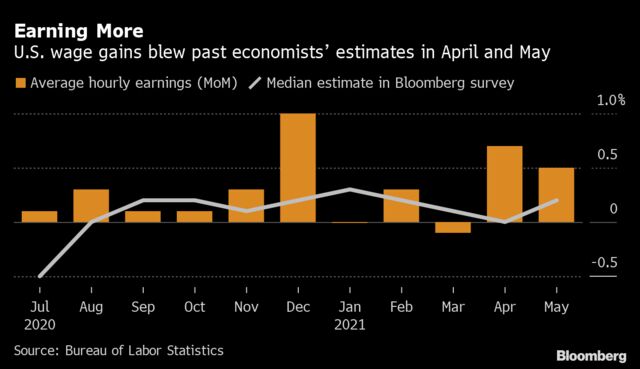 Employment is still way down from pre-pandemic levels, suggesting an ample pool of workers from which to draw, and most jobs being created right now are in low-wage industries like restaurants and tourism.

But last week’s jobs report showed a larger-than-forecast pickup in average hourly wages for a second straight month. It turns out that whatever the unemployment numbers say, there’s a shortage of people ready to work at the going rate of compensation — prompting many employers to boost pay or offer bonuses in order to staff up.

That raises the prospect of what’s known and dreaded in economics as a wage-price spiral. The idea is that higher wages spur more spending growth that strains production capacity and drives up business costs. In turn, companies raise prices and workers demand even larger pay increases to stay ahead of a rising cost of living. 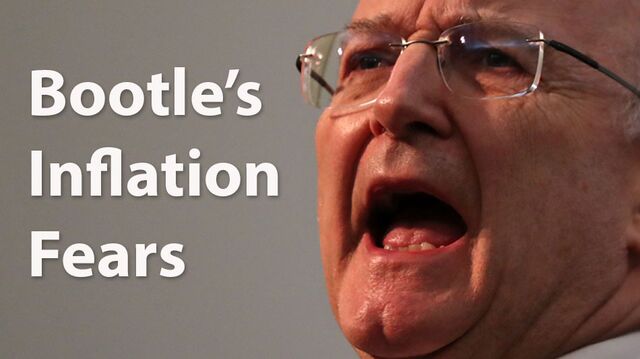 WATCH: Economist Roger Bootle discusses his renewed fears on inflation, 25 years after he declared its death.

Those dynamics contributed to persistently high U.S. inflation in the 1970s –- a period often invoked by those who fear a lasting wave of post-Covid inflation.

Federal Reserve officials aren’t in that camp. They acknowledge that pandemic policies like stimulus checks and enhanced unemployment benefits could push wages up, and noted last week that firms are boosting starting pay.

But they also say the increases are concentrated in lower-paid service industries –- where faster wage growth is exactly what the Fed and the Biden administration want to see — and haven’t spread up through the pay scale. More broadly, Fed Chair Jerome Powell has repeatedly argued that the once-close link between wages and inflation has broken down in recent years.

Some economists say the central bank is understating a significant risk.

“Fed officials do not believe that wage pressures can exist in a world with 6% unemployment, so they are in full denial,” Stephen Stanley, chief economist at Amherst Pierpont Securities LLC, said in a note. “A substantial pickup in wage gains would be the quickest path to turning a ‘transitory’ inflation blip into a persistent upturn.”

Across the U.S., job openings grew to a record-high 9.3 million in April, and some analysts saythat’s increased workers’ bargaining power. Other economists cite entrenched trends like declining union membership, and argue that they leave workers lacking the clout to make the pay increases stick in the longer term.

It will likely take many months of data to settle the argument, partly because the numbers coming in right now are still skewed by pandemic distortions that will take time to fade away.

For example, by far the biggest job creator last month was leisure and hospitality, which added a net 292,000 people as vaccinations and easing of lockdowns lured Americans back to restaurants or hotels. 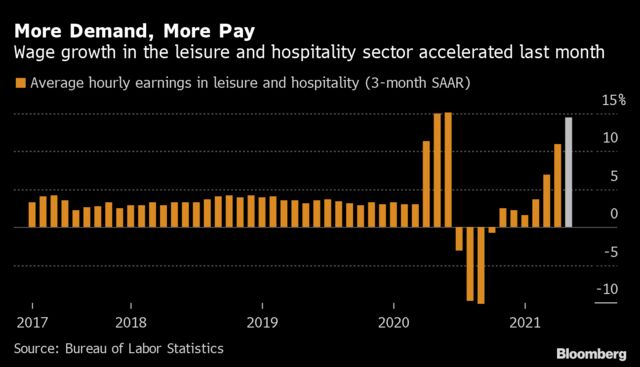 The average hourly wage in the industry was $18.09 in May, up from $17.86 in April, and over the past three months it’s risen at an annualized pace of 14.5%. Surging demand underlies the recent pay hikes at big companies like McDonald’s Corp. and Chipotle Mexican Grill Inc. Chipotle just announced it’s charging customers more too, showing how wage and price increases can accompany each other.

Some employers are offering sign-on bonuses to attract workers, rather than raising hourly pay. Those one-time payments are included in Labor Department earnings data, which could mean wage growth will slow once they drop out of the calculations.

On the other hand, an upward spiral could still be triggered as employers compete to attract workers with such payments, according to Adam Ozimek, chief economist at Upwork and co-founder of the Decades bar and grill in Lancaster, Pennsylvania.

“That means that you have to offer bonuses across the board” at a time when demand is still short of full capacity, he told Bloomberg Opinion in an interview.

Meanwhile, companies that are raising base pay are signaling that “they perceive a longer-term challenge to attracting workers that couldn’t be solved just by offering one-time bonuses,” said Daniel Zhao senior economist at Glassdoor Inc.

On that view, labor markets are undergoing lasting change rather than hiccups on the way back to their pre-pandemic state — which could mean wage increases, and whatever inflation risks they bring, are sustained for longer.

A recent study by the Economic Policy Institute highlighted another factor that’s driving wages up: More tipping at restaurants and bars, as customers return. 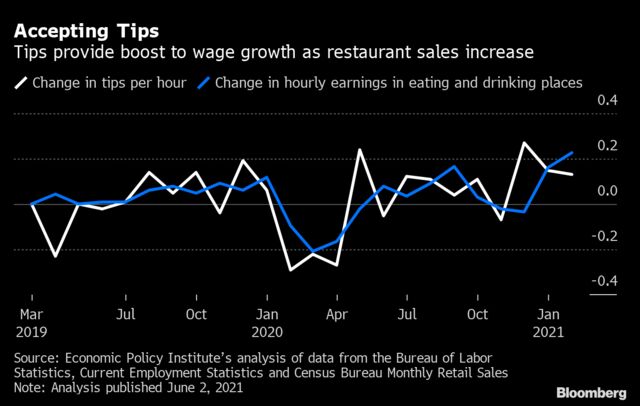 If that’s a large contributor to wage increases, then pressures should ease once restaurants reach full capacity, according to Josh Bivens, EPI’s director of research.

“So long as the industries that are seeing the really rapid wage growth are also the ones seeing really rapid employment growth, that actually doesn’t strike me as a shortage,” he said. “That strikes me as how economies adjust to a big increase in demand.”