Service Industries in U.S. Expand at Fastest Pace on Record

Service Industries in U.S. Expand at Fastest Pace on Record

(Bloomberg) –U.S. service providers experienced the fastest growth on record in March as measures of business activity and orders advanced to new highs.

The figures from the Institute for Supply Management on Monday underscore how looser business restrictions and increasing economic activity are igniting a rebound in sectors hardest hit by the pandemic.
The ISM’s services index soared to 63.7 from a nine-month low of 55.3, when severe winter weather gripped much of the country and curtailed activity. Readings above 50 signal growth and the March figure, the strongest in data to 1997, exceeded the most optimistic projection in a Bloomberg survey of economists. 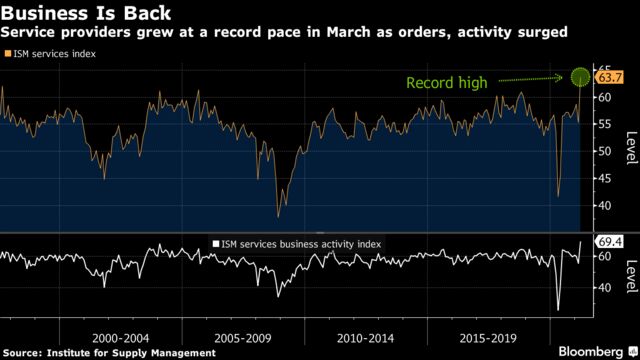 The report, covering the industries that make up almost 90% of the economy, follows figures last week showing manufacturers expanded by the most since 1983.
Together, the data highlight accelerating economic growth as more Americans are vaccinated against the coronavirus, restrictions on business are rolled back and fiscal relief takes hold.
“There was a substantial increase in the rate of growth in the services sector in March,” Anthony Nieves, chair of the ISM Services Business Survey Committee, said in a statement. The lifting of pandemic-related restrictions “has released pent-up demand,” he said.
All of the 18 service industries in the ISM survey reported growth in March, led by entertainment and recreation, wholesale trade and mining.
The group’s measure of new orders increased in March to a record 67.2 from 51.9 a month earlier. The gauge of business activity, which parallels the ISM factory production index, jumped to 69.4, also the highest in data to 1997, from a February reading of 55.5.
Consistent with the government’s latest payrolls report on Friday, which showed the economy added 916,000 jobs in March, the ISM’s employment index increased to the highest level since May 2019.
Read more: Job Growth Topped 900,000 in March as Hiring Broadened
The services figures also showed prices paid for materials jumped to 74, the highest since July 2008, from 71.8 a month earlier. Delivery times also lengthened slightly. The group’s manufacturing report last week showed a supplier deliveries index at an almost 47-year high.
April 5th, 2021|