Russian Oil Flows to Europe Have Quietly Started Creeping Up

Russian Oil Flows to Europe Have Quietly Started Creeping Up

Europe’s resolve to stop buying Russian crude may be starting to ebb.

The continent’s oil refineries took 1.84 million barrels a day of crude from Russia last week, according to tanker tracking data compiled by Bloomberg. That was the the third consecutive weekly increase and took flows from Russia to Europe, including Turkey, to their highest in almost two months.

Partly it was about Litasco SA, the trading unit of Russia’s largest oil producer, taking barrels to the company’s refineries, and partly it was about Turkey purchasing more. Beyond that, though, steady ongoing declines appear to have slowed.

The developments suggest those companies and countries who were unwilling to buy Russian have already stepped back, leaving the market to others who are happier to do so. Russian oil plunged to huge discounts after the country’s invasion of Ukraine as some companies stopped buying.

China and India are still the largest buyers of Russian crude, the weekly tracking data show.

The following charts show four-week averages of the destinations of crude shipments from Russian export terminals. With all cargoes loaded at ports on the country’s Pacific coast heading to China, Asia is now taking half of all the crude shipped from the country. That’s up from about one-third at the beginning of the year. 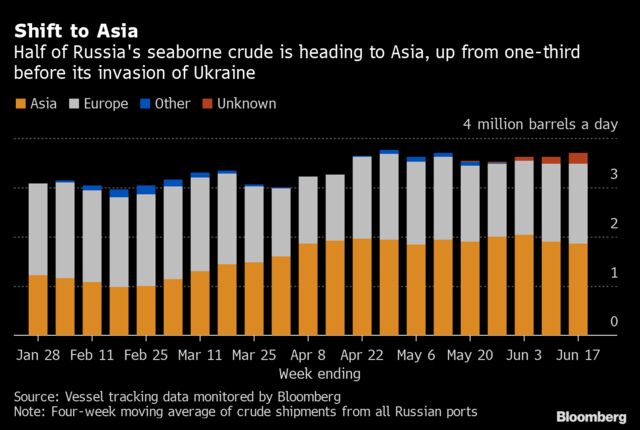 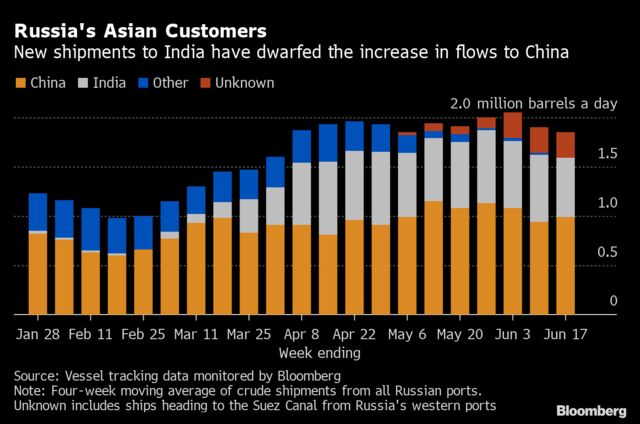 Russia has lost almost two-thirds of its market for seaborne crude in northern Europe, but the volume it’s shipping there has stabilized following its initial drop after Russian troops attacked Ukraine.

Shipments to the region averaged about 450,000 barrels a day in the four weeks to July 17, down from nearly 1.25 million barrels a day in the first four weeks of the year, but little changed over the past month. Most countries have almost completely halted imports of Russian crude by sea, well ahead of EU sanctions on the trade that are due to come into effect in December.

Significant volumes — about 370,000 barrels a day — are still shipped to storage tanks in the Netherlands, but even this is down by 35% from the levels seen immediately before the Russian invasion of Ukraine. Flows to Rotterdam were the highest in three weeks in the week ended June 17. 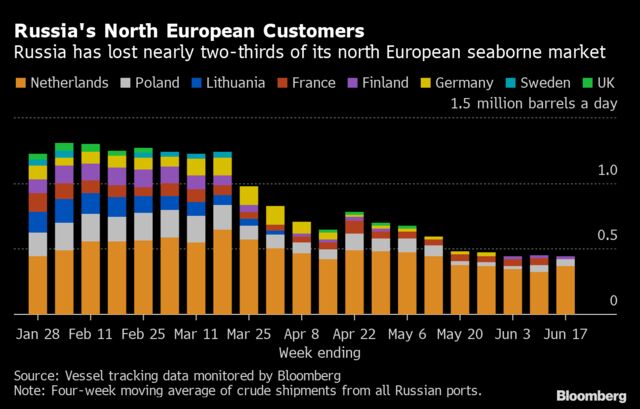 The picture in the Mediterranean is very different. Shipments of Russian crude to the region have soared.

A large part of the reason is the shipping of Russian crude to Russian-owned refineries in the region, particularly Lukoil’s ISAB plant on the Italian island of Sicily. Turkey has also stepped in to take a lot more Russian crude that has been diverted to the region from northern Europe.

It remains to be seen what ISAB will do when the EU ban on seaborne Russian crude comes into force in December. Until then, with no legal impediment to its purchases and few, if any alternatives to its diet of Russian crude, shipments are unlikely to fall. 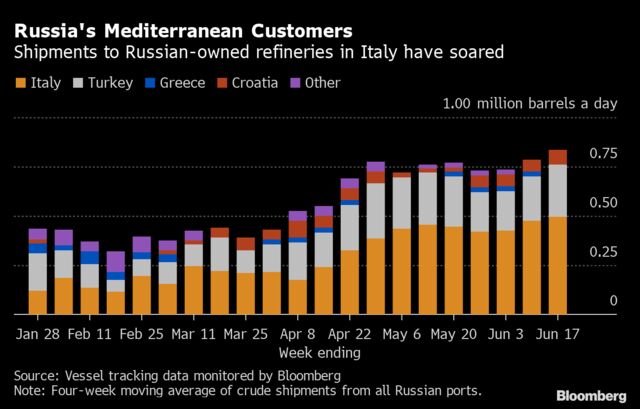 The Mediterranean picture is repeated in the Black Sea, again driven by increased shipments to a Lukoil-owned refinery in Bulgaria. While flows to Romania are little changed since the start of the year, those to Bulgaria are two and a half times as big as they were in January and early February. 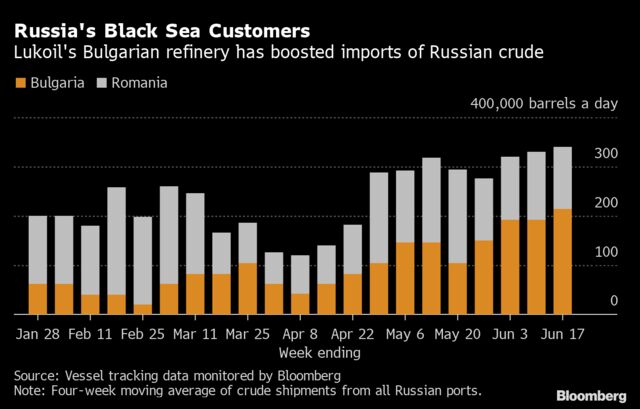 While the trade in Russia’s seaborne crude has been diverted away from northern Europe to Asia and the Mediterranean, so far the self-imposed curbs are having little impact on the overall level of shipments.

Total seaborne crude flows rose in the seven days to June 17, reversing about half of the previous week’s drop. A total of 35 tankers loaded 26.3 million barrels from the country’s export terminals, vessel-tracking data and port agent reports show. That put average flows at 3.75 million barrels a day, up by 6% from 3.55 million in the week ended June 10. 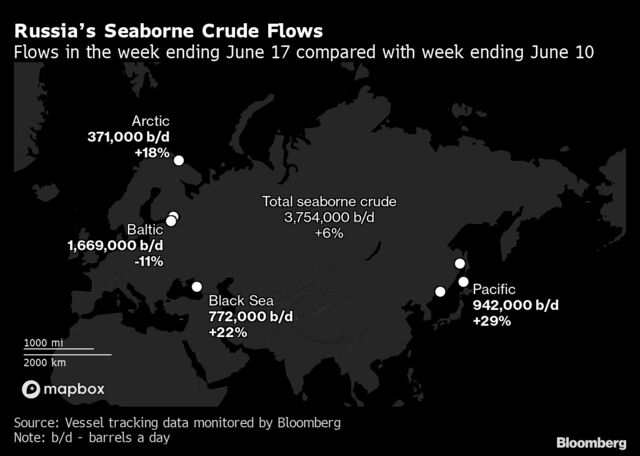 Flows of Urals crude from terminals in the Baltic, Russia’s primary outlet, fell in the week to June 17. But the Black Sea, the Arctic and the Pacific all saw weekly volumes rise, more than offset that drop. 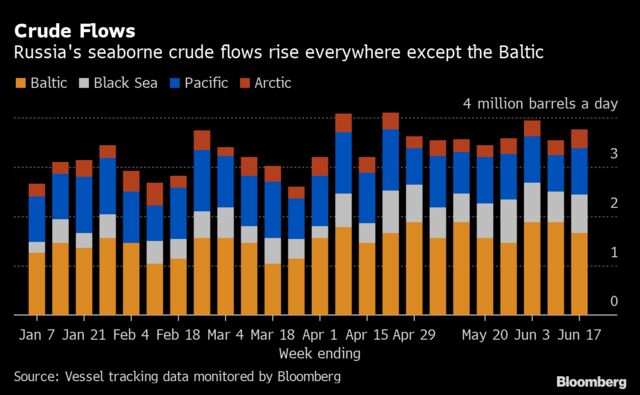 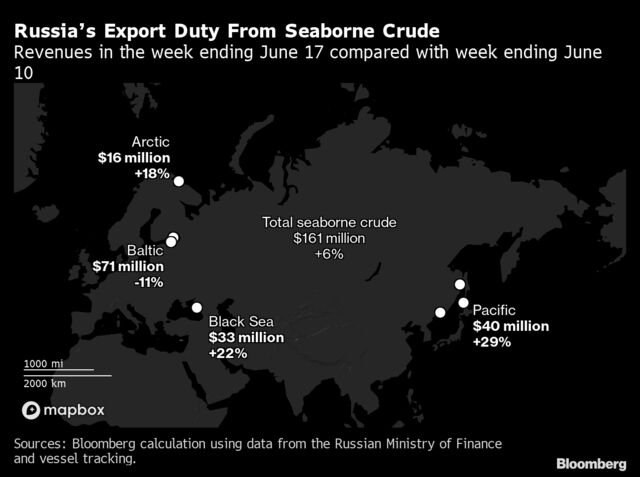 Duty rates are set to rise in July, after falling by 10% between May and June. Crude shipments in June earn the Kremlin $44.80 a ton, equivalent to about $6.11 a barrel, a figure that will rise to $55.20 a ton (about $7.53 a barrel) in July. That will be the highest duty rate charged by the Russian government since April, reflecting an increase in Urals prices between mid-May and mid-June. 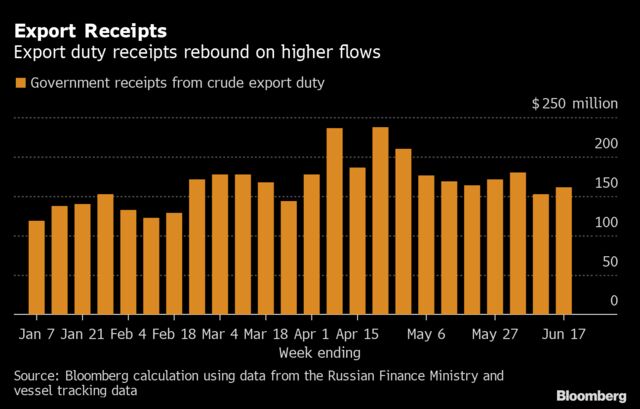 The number of cargoes shipped from Russian ports rose by one to 35 in the week to June 17 compared with the previous seven days. While fewer ships departed from ports in the Baltic, more departed from the Black Sea and the Pacific. 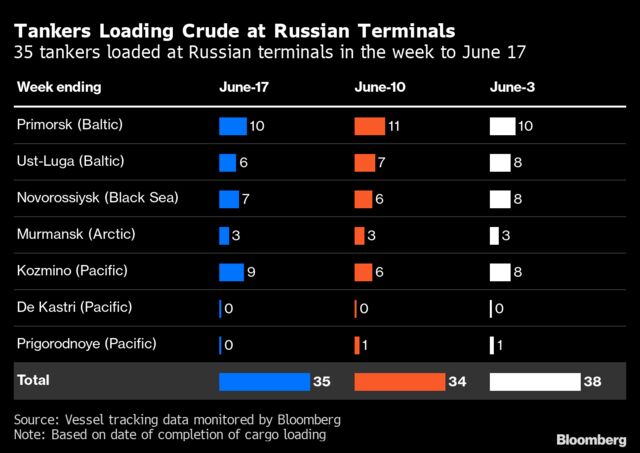 The following charts show the destinations of crude cargoes from each of the four export regions. Destinations are based on where vessels signal they are heading at the time of writing, and some will almost certainly change as voyages progress.

The total volume of crude on ships loading from the Baltic terminals at Primorsk and Ust-Luga fell in the week to June 17, the first drop in three weeks. Primorsk and Ust-Luga both handled one fewer ship than in the previous week. The volume on tankers showing destinations in northern Europe fell to equal its lowest in 12 weeks, while shipments to the Mediterranean increased for a second week. The volume on tankers signaling destinations in Asia was equal to its lowest in twelve weeks.

Flows to Asia are likely to rise, though, when ships that are yet to signal a final destination begin to show credible discharge locations. 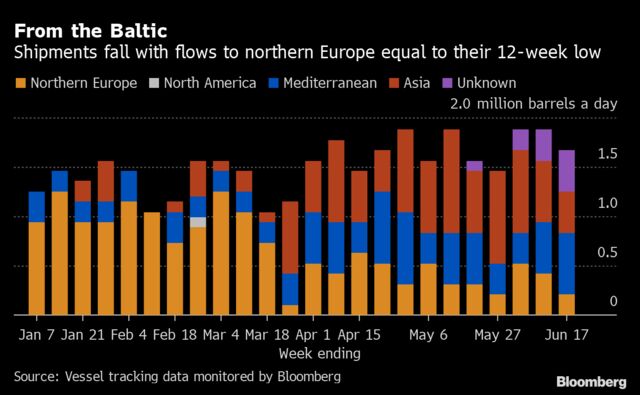 Crude shipments from Russia’s Baltic ports are still going according to plan. All cargoes scheduled to load at Primorsk and Ust-Luga during the week to June 17 were shipped within a day of their planned loading dates.

Seven tankers completed loading at Novorossiysk in the Black Sea in the week to June 17, with a big jump in volumes heading into the Mediterranean. Shipments to Bulgaria and Romania slipped for a second week, falling to their lowest level in more than a month.  No ships loading at Novorossiysk in the week to June 17 are indicating that they are heading to Asia. 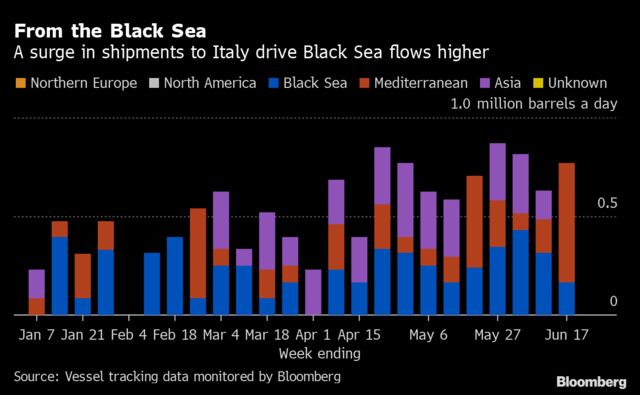 All of the cargoes scheduled from Novorossiysk during the week loaded within two days of the dates on partial loading programs seen by Bloomberg.

As in each of the previous two weeks, two ships loaded from Gazprom Neft’s Umba floating storage facility at Murmansk, one heading for Rotterdam and the other to India. A third took a cargo from the Kola storage tanker used by Lukoil and is heading to the company’s ISAB refinery on the Italian island of Sicily. The cargo heading to India was larger than those loaded in prior weeks, leading to the jump in the volume seen in the week to June 17, which was the highest since early April. 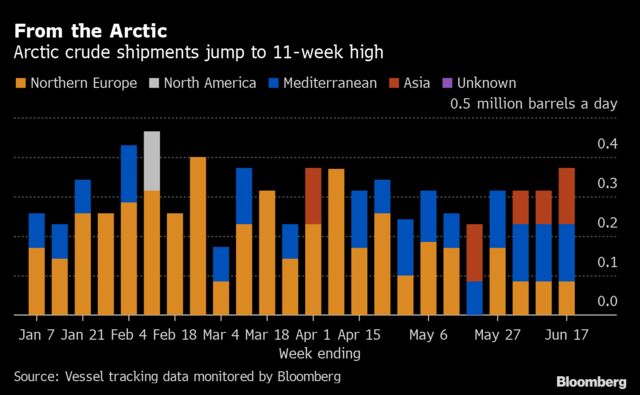 Crude flows from Russia’s three eastern oil terminals — Kozmino, De Kastri and Prigorodnaya — rebounded from the previous week’s dip, thanks to a surge in flows of ESPO crude through Kozmino in the week to June 17. Pacific shipments rose by  214,000 barrels a day, or 29%, week on week to 942,000 barrels a day.

Nine tankers loaded ESPO crude at Kozmino, up by three from the previous week, with 19 cargoes loaded in the first 16 days of the month. China has become the only buyer of Russia’s Pacific crude grades, with all cargoes loaded in the past four weeks heading there. Tankers owned by China’s Cosco Shipping Holdings Co. that had been shuttling crude from Kozmino to Yeosu in South Korea where it was transshipped onto larger vessels for onward delivery to China, have begun making the whole voyage from Russia to China, but they remain regular participant in the trade. 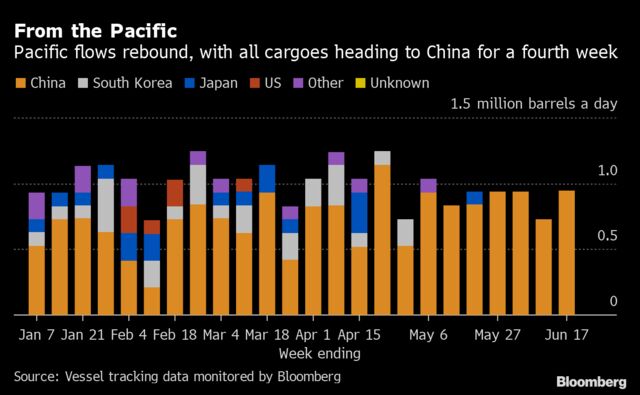 There were no shipments for a sixth week from De Kastri, which handles Sokol crude from the Sakhalin 1 project. Three Sovcomflot tankers remain anchored empty off the oil terminal, where they have been since late April.

No cargoes of Sakhalin Blend crude were loaded in the week to June 17.

Just two tankers left Russia’s western export terminals signaling destinations in India in the week to June 17. Another two are heading to India, while a further four departed showing no clear final destination for their cargo. One, Zhen I, is showing a destination in the Azores, one is signaling Gibraltar and one Malta. The fourth, Amber 6, is heading out into the Atlantic, showing no destination. 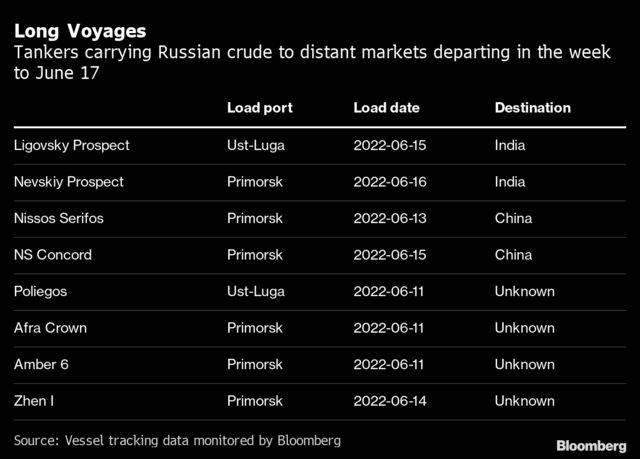 Several tankers that loaded in earlier weeks are still not showing final destinations, with most continuing to indicate Port Said .

Four ships loaded with Russian crude — Skadi, Emily S, Merope and Zhen I  —  were heading for the Azores in the middle of the Atlantic Ocean, although the Emily S turned back north after nearing the islands. A cargo of about 730,000 barrels was transferred from the Afrapearl to the VLCC Lauren II in the waters near the Azores between June 15 and June 17. It was the second cargo to be transferred into the Lauren II, which remains in the area, perhaps to take a third transfer from one of the other ships heading to the area.

A second observed transfer took place off Ceuta in the west Mediterranean, from the Vergios to the Giannis. That cargo is now heading toward the Suez Canal, although its destination beyond that remains unclear.

Separately, several tankers full of Russian crude are in the vicinity of Singapore. The Tao Lin Wan, which took on a cargo at Ust-Luga in May is anchored off the city-state, while the NS Consul is reporting its status as “Moored” off Johor to the east of Singapore, a common location for transferring cargoes from one vessel to another. If the NS Consul is carrying out a ship-to-ship transfer, the vessel receiving the cargo is hidden, not transmitting a signal to identify it and its location. This would be the first such “dark” transfer of Russian crude since the invasion of Ukraine.

Note: This story forms part of a regular weekly series tracking shipments of crude from Russian export terminals and the export duty revenues earned from them by the Russian government.

Note: Bloomberg uses commercial ship-tracking data to monitor the movement of vessels. Ships can avoid detection by turning off on-board transponders, as has been done widely by the Iranian tanker fleet. There is no evidence yet that this is being done by crude oil tankers calling at Russian ports.

Note: Destinations are those signaled by the vessel and are monitored until the cargo is discharged. Destinations may change during a voyage, even under normal circumstances, and the final discharge point for the cargo may not be known until that port is reached.

Note: Cargo volumes are based on loading programs, where those are available, and on a combination of the ship’s capacity and its depth in the water where we have no other information.