It took the hottest inflation print in three decades to finally halt the S&P 500’s five-week advance. But it was hardly a body blow for a stock market where resilience continues to be the headline story.

Still, while the report rekindled fears that price pressures will one day lead to a recession, it couldn’t quite shake investors of their faith in Corporate America’s earnings machine, which has powered the S&P 500’s 25% surge this year. Companies across industries have managed to navigate supply chain bottlenecks and climbing input costs by raising prices, which have been readily absorbed by consumers — so far. Should inflation broaden and build, the worry for stock bulls is that demand drops off as price tags climb.

“While the consumer is still accepting these higher prices, industry and businesses are still passing on those higher prices without too much problem, and while wages are pushing higher, there doesn’t seem to be too much actually reining in that spiral of inflation,” Fiona Cincotta, senior financial markets analyst at City Index, said by phone. “That’s probably what makes me feel a bit uneasy at the moment, there doesn’t seem to be any containment.” 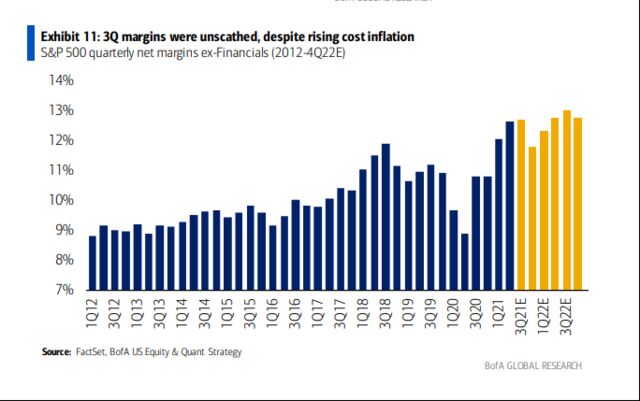 The anxiety had ebbed by Friday, with the S&P 500 notching a 0.7% gain. Tech fared even better, with the Nasdaq 100 rallying 1% after posting its worst decline in a month after Wednesday’s CPI report.

While concern over shortages of everything from semiconductor chips to workers has been palpable on earnings calls, businesses have so far been able to capitalize on climbing inflation. Bank of America estimates that net margins for S&P 500 companies remained at a record high in the third quarter, versus the firm’s expectations for a 70-basis point drop. While BofA analysts are still anticipating a decline in the coming quarters, they’re beginning to reconsider.

“Many companies touted their pricing power and planned further pricing increases in the coming months,” BofA strategists Savita Subramanianand Ohsung Kwon wrote. “Given the continued margin strength, the estimates may surprisingly prove to be too conservative, absent further macro deterioration.” 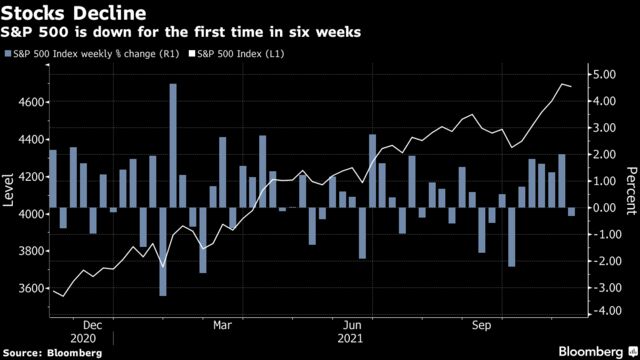 The coming week will bring a test as retailers — among the most exposed to rising materials and labor costs — unveil their third-quarter earnings and outlooks. Tyson Foods Inc., Home Depot Inc. and Macy’s Inc. are among the companies scheduled to report.

“If companies need to rein in enthusiasm on margins and course correct optimism on supply chain pressures abating at mid-year, that’s when it is likely to happen and reverberate in the equity market,” Calvasina, RBC’s head of U.S. equity strategy, wrote in a note. “We see those as hurdles and speed bumps that could slow down the equity market’s gains in the year ahead but are unlikely to derail them entirely, as long as the economic expansion remains intact.”