JPMorgan’s Kolanovic Says Stocks ‘Can Climb Out of This Hole’

JPMorgan’s Kolanovic Says Stocks ‘Can Climb Out of This Hole’

Marko Kolanovic is resolute that things can get better for U.S. stocks as the year progresses, even with the S&P 500 tumbling and bullish catalysts seeming rare these days.

“We can climb out of this hole,” Kolanovic, JPMorgan Chase & Co.’s co-head of global research, said in an interview last week in his New York office, referring to stock prices. “There will be no recession this year, some summer increase in consumer activity on the back of reopening, China increasing monetary and fiscal measures.”

Bolstering his opinion is a conviction that US inflation has probably peaked, or is about to do so, paving the way for a pullback in price pressures that will eventually allow the Federal Reserve to moderate the pace of monetary tightening. Fed Chair Jerome Powell, in his most hawkish remarks to date, said Tuesday the US central bank will keep raising interest rates until there is “clear and convincing” evidence that inflation is in retreat.

Americans got little respite from inflation in April, as prices for a range of necessities and discretionary-spending categories continued to climb at some of the fastest-ever rates. While annual measures of consumer prices cooled slightly from March — signaling a peak that economists expected — the details of a report last week painted a still troubling picture as monthly figures advanced more than forecast.

“Most of the bad things have happened already this year,” Kolanovic said. That includes “the Fed making a very drastic turn and heading very aggressively toward tightening. And then war in Europe, which we would say is impacting commodities inflation for the consumer, especially in Europe. And then China, again, we were somewhat hopeful that China would stabilize and more rapidly stimulate their economy, and they would not go through significant lockdowns again.”

Kolanovic, one of the most closely watched strategists on Wall Street, was elevated to his current role along with Hussein Malik in September. JPMorgan was named top global research firm and number-one equity research team in Institutional Investors’ survey results released in January, after already having been awarded number-one global fixed income research team. 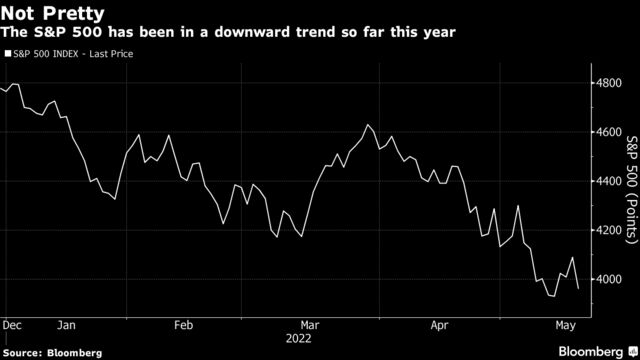 While Kolanovic and strategists like Kate Mooreat BlackRock Inc. have suggested that concerns of an imminent recession are overblown, investors are piling into cash as stagflation worries mount, according to a recent Bank of America Corp. fund manager survey.

Kolanovic has maintained a bullish point of view even as stocks have tumbled. Just in the past couple of weeks, he’s advocated adding risk on peak hawkishness, and said markets are overpricing the odds of a recession. In mid-March he said market corrections were almost done, after in February saying bond traders were overpricing a hawkish Fed.

Kolanovic made the comments Friday, when the S&P 500 rallied 2.4% from the May 12 close of 3,930.08. It slumped Wednesday to close back at 3,923.68. He wasn’t immediately available to offer fresh commentary after that drop, though he had said in the interview that he’s taking a longer-term perspective with his view.

US equities posted their worst rout since June 2020 on Wednesday as investors assessed the impact of higher prices on earnings and monetary-policy tightening on economic growth. The slide extended this year’s selloff in the S&P 500 to about 18%.

As for specific levels on the benchmarks that should attract interest, Kolanovic says now isn’t the time for broad-brush strategies because gauges like the S&P 500 have some expensive stocks and some cheap ones. He sees significant opportunity in innovation, biotechnology and international growth shares, but recommends staying away from defensive companies such as dividend-payers and staples — which are expensive in his view.

“I almost refuse to talk about ‘where should I buy S&P?’” he said.