As the U.S. job market comes roaring back, there’s a growing debate about whether there are enough workers to power faster economic growth.

But economists and policy makers are unclear about what’s really causing this gap and how long it will last. Hiring remains robust for now, indicating these labor disparities aren’t necessarily a problem. The worry is if labor shortages do persist — especially in the leisure and hospitality industry — that could slow demand and possibly lead to price increases.

Friday’s employment report, which is projected to show the economy added 1 million jobs in April, should offer new insight into this mismatch and whether it’s deterring growth.

“There is definitely a job paradox that’s going on,” said Joe Song, senior U.S. economist at Bank of America Corp. It’s difficult to quantify, “but it’s clearly a challenge that’s weighing on a quicker pace of recovery.” 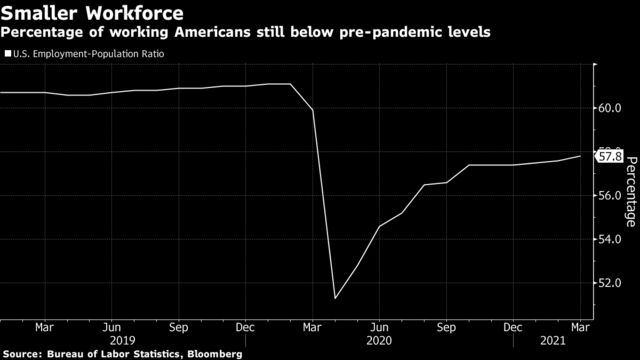 While the unemployment rate probably fell to 5.8% last month, according the median estimate in a Bloomberg survey of economists, the labor force participation rate remains well below pre-pandemic levels. Further, the employment to population ratio — which measures the share of the population that is employed — is still more than three percentage points below where it was before Covid-19.

Lingering health concerns, ongoing child care responsibilities and the inability to do some jobs from home are just some of the reasons why Americans are reluctant to return to work. Some are also retiring early.

And anyone who previously made less than $32,000 per year is better off financially in the near term receiving unemployment benefits, according to economists at Bank of America. 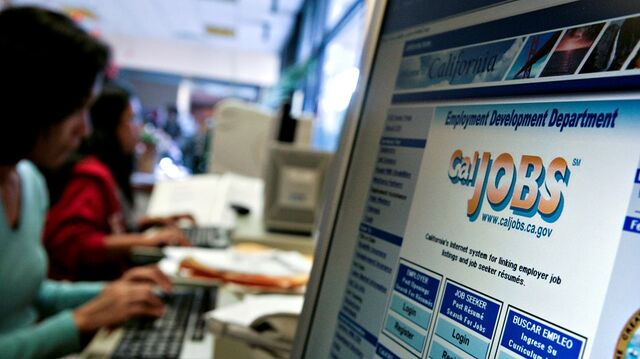 WATCH: Initial jobless claims in regular state programs fell to a pandemic low of 498,000 in the week ended May 1.

Zoraida Rodriguez, a cleaner at the Bernard B. Jacobs Theatre in New York for 15 years, says she can’t find a retail job with steady work and collecting unemployment is a better option until Broadway theaters reopen and she can return to her old job.

“Is it worth it to go to a $10-an-hour job without benefits?” said Rodriguez, who lives in New Jersey. 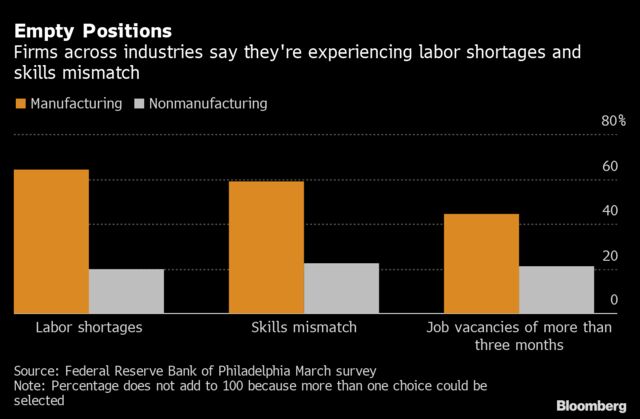 But fiscal stimulus isn’t the only problem. Many of the unfilled jobs in the restaurant and retail industry underscore the fact that employers aren’t paying adequately or giving workers enough hours, according to Economic Policy Institute’s Heidi Shierholz.

“Employers are like: ‘Why the hell, if there are so many people who need jobs, can’t I find somebody really awesome, really cheap?’” said Shierholz, who worked as chief economist at the Labor Department under President Barack Obama.

The pandemic has also exacerbated shortages of skilled workers in certain industries, like manufacturing and construction, that existed before the crisis.

Filling vacancies remains a widespread challenge, especially for low-wage and hourly workers, and many firms have had to increase pay or offer signing bonuses to attract applicants, according to the Federal Reserve’s latest Beige Book.

What’s more, the rate at which people are quitting their jobs is in line with rates before the pandemic, according to government data.

“While there will undoubtedly be pockets of inflation pressures in the short run as the economy reopens, a sustained increase will remain elusive until there is a broader pickup in wages. And this will be difficult to achieve until various sectors move from recovery into expansion.”

All of this could hamper economic growth. Already, the Biden administration is grapplingwith challenges posed by this labor market disparity.

“If we’re having that kind of job shortage at a time when the economy is still in front of what almost everybody thinks is going to be a very substantial boom over the next six months, I am concerned about inflation and inflation expectations,” said former Treasury Secretary Larry Summers in a Bloomberg TV interview.

But policy makers including Fed Chair Jerome Powell say the mismatch is temporary and that workers will likely eventually return to the labor force, including after extended jobless aid programs end. 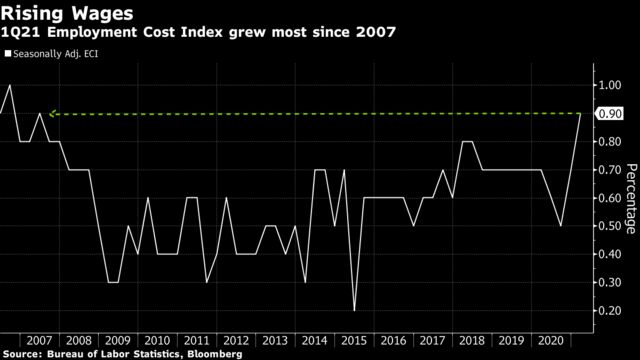 Case in point: Payrolls among private employers surged in April across most industries, bolstered by gains in leisure and hospitality, according to ADP Research.

“When we are hearing stories of businesses having to raise wages in order to attract workers back, that’s a good thing,” said White House economic adviser Bharat Ramamurti in a Bloomberg TV interview. “That is a positive development, especially for lower-income folks in this country.”

And as more workers come back in the coming months, it means employment gains could continue well into next year.