How the Ukraine Offensive Will Shift the Market Narrative

How the Ukraine Offensive Will Shift the Market Narrative

The Ukrainian armed forces appear (and I emphasize appear) to have taught the rest of the world yet another lesson in the need to be cautious about knowing what we know. If the reports of the last few days are correct, then the chances of a Ukrainian “victory” have risen sharply, just as have the chances that the war’s aftermath will at last lead to the downfall of Vladimir Putin in Russia. The odds on a lengthy stalemate that can mostly be ignored by the rest of the world (a sort of wider-scale version of the situation that had adhered since Russia’s first incursions into the Donbas in 2014) do appear to have been reduced.

The question is whether in narrowly economic and financial terms the outcomes that now appear to be growing more likely will be better or worse. And that answer isn’t clear.

I would summarize the scenarios that have all been in the ascendant at one point this year as follows (in chronological order):

That was the dominant narrative right up to the moment that Russia invaded.

This one lasted for about four days after the invasion, and began to go into eclipse as stories that Russia was bogged down became more frequent in the conflict’s second week.

This narrative, understandably popular in the west, took hold after Russia abandoned its attempt on Kyiv.

Russia’s capture of Mariupol, and the steady drip of news that it was reinforcing its hold over the most strategically important parts of Ukraine, turned this into the dominant narrative about two months ago.

The reports of the last few days really do suggest Russian fragility. If Ukraine wanted to prove its viability to its western backers, it would seem to have done so; money spent sending weaponry begins to look like a good investment again.

How does this latest shift in the Ukraine narrative change the market narrative? This is where it gets very much trickier. The ugly standoff in which Putin gets most of what he wants, but is discouraged from trying any other aggressions, was appealing to markets. It implied some kind of excuse for Europe to lift its sanctions, easing the energy crisis, while still limiting Russian impunity. The implications of a resurgent Ukraine are harder to gauge.

Russia has been accused in the latest hours of directly targeting Ukrainian infrastructure to cut off electricity to the city of Kharkiv. Faced with battlefield humiliation, this reminds us that the country can retaliate. A more successful Ukraine might increase the incentive for Russia to cut off energy supplies to western Europe. That could be Moscow’s best chance to stop the flow of high-quality weaponry to its Ukrainian opponents. Any Russian escalation on the battlefield (to put it euphemistically) could also frighten the rest of the world and prompt another flight to safety.

The sharp turnaround in the dollar at the end of last week followed an extreme runup that looked unsustainable. It had plenty of causes. But the sign that Putin was in more trouble than thought might well have helped risk sentiment, and persuaded more people to leave the shelter of the dollar. The changing geopolitical situation adds to the uncertainty, and the possibility of sharp moves in currencies.

One final point is that the market’s attitude to events in Ukraine has been inconsistent. For a few weeks in March, the invasion appeared to have changed the world. But since then, the succession of different narratives have had minimal effect. The steady evidence that Russia was gaining the upper hand had little discernible impact on equity volatility. Having risen above 36 in March, the Vix index of volatility now stands at 22. Will investors show such equanimity now?

Also, will they show some humility. It is hard for people who make a living in finance to assess military strategy from reports on the ground, and also to judge the broader strategic response that could follow. It all adds up to a case of caution, even in the face of what most of us would regard as very good news.

Brace for the next dose of macro-excitement when the US publishes September consumer price inflation figures on Tuesday. The tacit expectation is that the headline inflation number will fall, and that that will cheer people up. The main reason for this is that the massive spurt in prices at the petrol pump that followed the Ukraine invasion has now almost completely reversed. This is the average gasoline price in the US, as measured by the American Automobile Association: 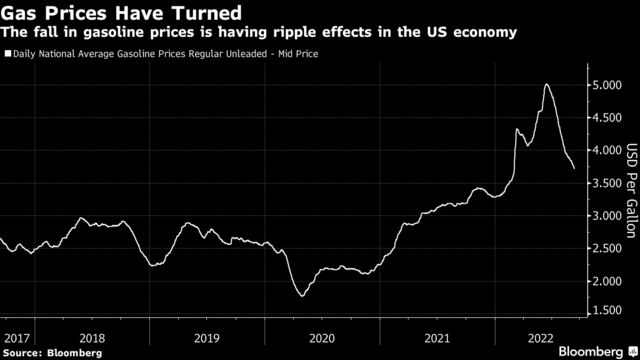 This helps bring headline inflation under control. It also stimulates the economy. And for that reason, counterintuitively, it’s not at all obvious that the gas price in itself will help persuade the Federal Reserve to be more lenient with its rate hikes.

To demonstrate, look at the latest data produced by Bank of America Corp. by analyzing spending on its credit and debit cards. It’s a national franchise and over time its numbers have risen and fallen with broader consumption data, so it is worth following. The bottom line was that last month, card spending was up 5.0% year-over-year per household. It rose 0.2% on a month-over-month seasonally-adjusted basis in August, despite a 4.9% slide in spending on gasoline compared to July. In other words, consumers took all the money they had previously had to spend on filling their tank, plus a little more, and spent it on something else. At the margin, cheaper gas is like a tax cut.

Since the Ukraine invasion at the end of February, consumers have scarcely ever adjusted their gasoline usage to account for changing prices. In the economic jargon, they turn out to be “price-inelastic,” as this chart from BofA demonstrates; 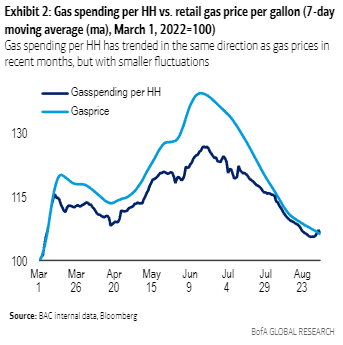 Further, the positive impact of a gas price fall is magnified by economic inequality. Poorer people are more likely to spend rather than save any extra money than richer people and, it turns out, lower-income households spend more on filling the tank not only in relative but also absolute terms: 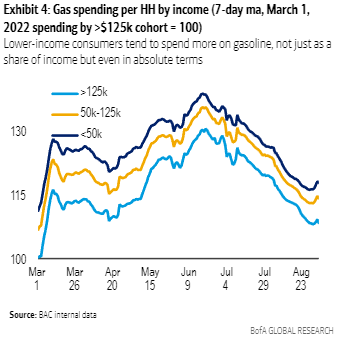 Put this together and the BofA data are easy to believe. Just as the higher prices drove greater recession fears earlier this year, so the fall relieves those worries. The effect on consumer sentiment also helps.

The problem is that this increases pressure on core inflation. With demand strengthening, there is more risk of high inflation excluding food and fuel, which is what the Fed is charged with limiting. It seems that markets are nicely set up to view almost any CPI outcome as positive this week. But headline inflation is less important than the core numbers, and expectations as polled by Bloomberg suggest that economists don’t expect core CPI to show a decrease: 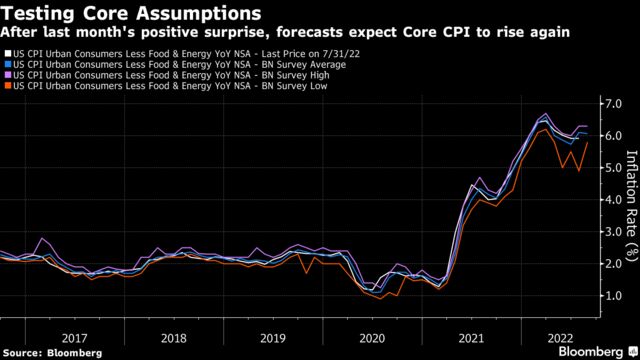 Note that the analysts predicting a sharp fall in inflation seem to have admitted defeat. But the bulk of analysts, who overestimated core inflation last month, expect it to rise a little. Are they right? A positively surprising low number on this would be very significant.

What Are You Afraid Of?

Always in markets, moves are driven by prices and positioning. Only moderately good news can still have a very positive impact if everyone was braced for something far worse. Positioning has largely driven the series of rallies and selloffs over the last few months. The bounce for stocks toward the end of last month owes at least something to the growing notion that markets had grown oversold.

Possibly my favorite indicator for this now bears the name of its inventor, Tobias Levkovich, the Citi equity strategist who died in tragic circumstances last year. He put together a number of different measures of positioning to produce what he called the “panic/euphoria” index. This is directly contrarian — “panic” readings suggest the market is going to rise. At the current level, the market is only a hair’s breadth from outright panic. Current levels imply a 95% probability of positive return over the next 12 months: 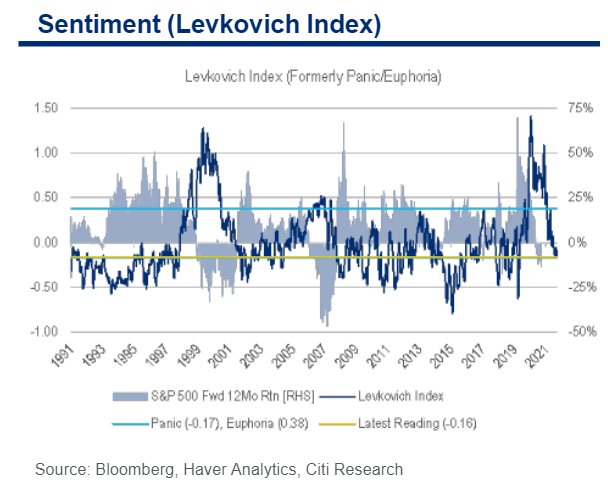 If underlying sentiment is that unsettled, there are possibilities for big rallies (and of course bad news from Ukraine, or some other negative geopolitical development, could inflict some pain). Particularly eye-catching, and much commented in the last week, has been remarkable activity in put options, which are used to protect against falls. As this chart from SentimentTrader shows, investors are buying put protection at a rate almost equivalent to the worst week of the crisis that followed the bankruptcy of Lehman Brothers in 2008: 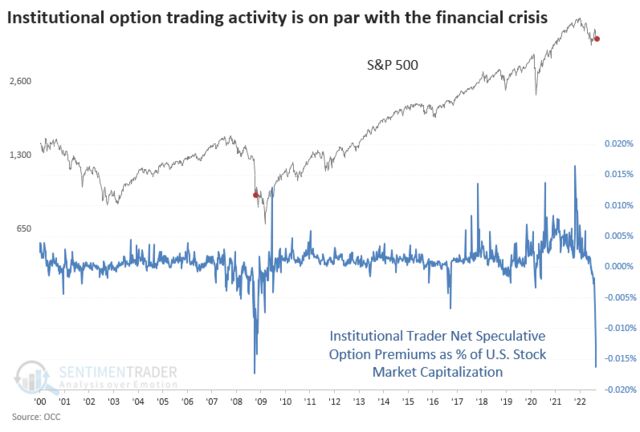 With this many people betting on a selloff, it wouldn’t take much good news to spark a recovery.