Don’t expect the Federal Reserve to materially shrink its balance sheet for quite some time.

Analysts and economists are coming to the conclusion that  U.S. central bankers will keep slowly expanding their $8.2 trillion stockpile for the foreseeable future, even if the economic recovery stays on track and they start to pare back their $120 billion monthly bond purchases.

Societe Generale’s Subadra Rajappa could see a $1 trillion boost to the assets already held by the Fed within the next 12 months, even with a taper on asset buying. Steven Ricchiuto, chief U.S. economist at Mizuho Securities, said he expects the Fed to keep expanding its books at the pace of nominal gross domestic product, even after it stops its latest round of quantitative easing. 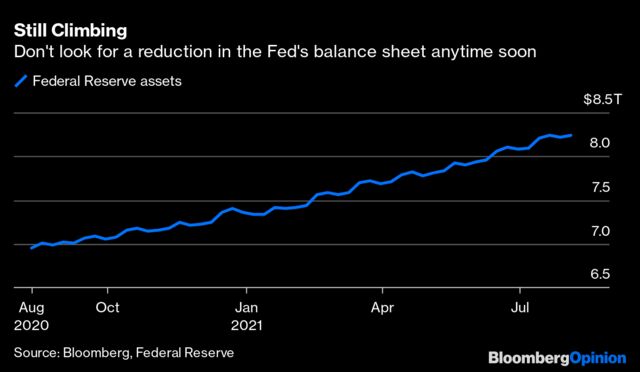 Part of the reason is that the Fed has been burned before. In 2018, when it started to allow a small portion of its debt holdings to mature without reinvesting the proceeds, 10-year Treasury yields rose to a high of 3.24%. Economists worried about an unforced policy error because inflation wasn’t running particularly hot, one of the key metrics that  the Fed follows closely. Republicans, including President Donald Trump, accused the central bank of political motivations.

U.S. central bankers reversed course and ended the balance sheet runoff two months earlier than planned. In the two-year span when the Fed was shrinking its books, its assets fell from about $4.4 trillion to $3.76 trillion. Nothing particularly catastrophic resulted from the whole affair, but it was short-lived and took place amid an economically strong period. The Fed doesn’t want to unnecessarily thrust itself into a political debate again with little gain.

Meanwhile, the central bank’s hands are tied a little more than in the past because rates are already so low and aren’t likely to rise much, even in a hot economic recovery. This gives Fed officials less ammunition to counter the next downturn and makes the balance sheet an even more important tool than in the past.

The implications are significant: Treasury yields are likely to remain lower and the credit cycle less volatile. The Fed will increasingly view the Treasury market as a policy tool rather than a pool of freely traded securities that rise and fall depending on the nation’s debt load and growth rate. And the credit markets will be along for the ride, especially because central bankers have shown they’re willing to include corporate bond purchases in their arsenal of tools to ease financial conditions.

So even as concern grows about when and how the Fed will eventually begin scaling back its asset purchases, the effect of any pullback will be tempered by a much bigger balance sheet in the years to come.