By Craig Torres and Matthew Boesler

Federal Reserve officials continued to project near-zero interest rates at least through 2023 despite upgrading their U.S. economic outlook and the mounting inflation worries in financial markets.

The decision, which came on a volatile day for investors with Treasury yields surging ahead of the announcement, masked a growing number of officials who saw liftoff before then, though Chair Jerome Powell stressed this was a minority view.

“The strong bulk of the committee is not showing a rate increase during this forecast period,” Powell told a virtual press conference Wednesday following the decision, adding that the time to talk about reducing the central bank’s asset purchases was “not yet.”

Seven of 18 officials predicted higher rates by the end of 2023 compared with five of 17 at the December meeting, showing a slightly larger group who see an earlier start than peers to the withdrawal of ultra-easy monetary policy, according to the Federal Open Market Committee quarterly economic projections issued alongside its policy statement.

“Indicators of economic activity and employment have turned up recently, although the sectors most adversely affected by the pandemic remain weak,” the FOMC said in its statement. “Inflation continues to run below 2%.”

The Fed expects that a bump in inflation this year will be short-lived. Officials saw their preferred measure of price pressures slowing to 2% next year following a spike to 2.4% in 2021, according to the projections. Excluding food and energy, inflation is forecast to hit 2.2% this year and fall to 2% in 2022.

Asked about the move in yields, Powell notedthat it was “important conditions continue to remain accommodative” and that he would be concerned by “disorderly markets,” repeating a line he used earlier this month.

“The Federal Reserve continues to hold the course, maintaining the glide path for both rates and asset purchases which it established last year, and does not appear to be close to altering its trajectory anytime soon.”

U.S. central bankers left asset purchases unchanged at $120 billion a month and repeated that this pace would be maintained until “substantial further progress” is made on their employment and inflation goals.

The target range of the benchmark federal funds rate was also kept at zero to 0.25%, where it’s been since last March.

Powell and his colleagues met as the economy continues to improve. Job gains picked up last month and President Joe Biden signed an additional $1.9 trillion of pandemic aid into law on March 11. Vaccinations continue apace, allowing states to start easing lockdown restrictions that could release a torrent of consumer spending.

The economy remains far from the Fed’s goals, though. Even with 379,000 jobs added to payrollsin February, 9.5 million fewer Americans have jobs compared with a year ago and inflation remains well below the Fed’s 2% target.

“This particular downturn was a direct hit on the part of the economy that employs many minorities,” Powell said. 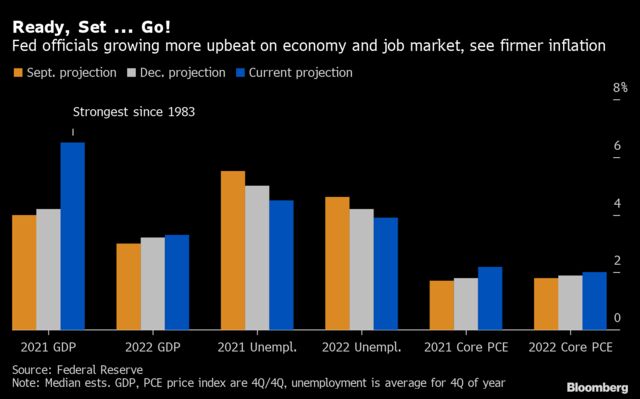 Still, prospects for stronger growth have ignited some concern about higher inflation, contributing to a rise in 10-year Treasury yields in recent weeks. Powell told lawmakers in testimony last month that the economy is still has a long way to go before there’s any risk of overheating.

They also upgraded forecasts for economic growth and the labor market, with the median estimate for unemployment falling to 4.5% at the end of 2021 and 3.5% in 2023, while gross domestic product was seen expanding 6.5% this year, up from a prior projection of 4.2%.

Christopher Waller, who joined the Board of Governors in late December, contributed projections for the first time this month.