Growth prospects for the U.S. economy this year are brightening considerably as Americans get vaccinated from the coronavirus and Congress closes in on another massive fiscal relief package.

The latest Bloomberg monthly survey of economists shows the pace of growth in the first quarter will be twice as fast as respondents expected just two months ago. Growth estimates were also revised up for subsequent quarters through year-end. 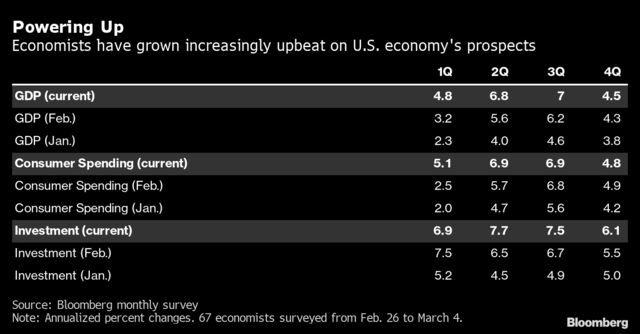 GDP is projected to rise an annualized 4.8% in the current quarter, up from 3.2% in the February survey and 2.3% in January, according to the median forecasts in a Feb. 26-March 3 survey of 67 economists. Economists also boosted their inflation forecasts, though only slightly.

The vaccine roll-out “seems to be going well and that raises the odds of an earlier and broader re-opening in 2Q,” said James Knightley, chief international economist at ING Financial Markets. With “the red-hot housing market that is fueling a construction boom, and the solid manufacturing numbers and the positive investment backdrop, we have revised up our growth and inflation numbers.”

Economists in the survey also updated their job growth forecasts for every quarter of this year, and expect the unemployment rate to fall to 5.1% by the fourth quarter. A separate report Friday from the Labor Department showed a higher-than-expected employment gain in February, propelled by a 355,000 surge in leisure and hospitality payrolls.

In addition to expectations of an almost $2 trillion fiscal relief plan, the adjustments follow stronger-than-expected January retail sales, new-home sales and industrial production data. Economic growth this year is estimated to average 5.5%, up from a previous forecast of 4.9% and the strongest since 1984.

The growth outlook is also improving as more Americans receive vaccinations against the coronavirus and states begin to relax mandates aimed at controlling the spread.

Government spending is seen climbing an annualized 3% in the second second quarter, an upward revision of 1.4 percentage points from the February survey. Forecasts for consumer spending and business investment were also boosted, along with inflation.

Economists project the personal consumption expenditures price index will average 2.4% in the second quarter, up from a previous projection of 2.2%. First and third quarter forecasts were also adjusted higher.