Markets have been obsessed — and sometimes roiled — for months over whether higher inflation is coming. The latest batch of quarterly reports suggests it’s already here and helping corporate America.

Faced with rising prices for everything from lumber to oil to labor and computer chips, chief executive officers have cut costs and boosted prices for their products. The strategy appears to be working, with first-quarter income from S&P 500 companies jumping five times as fast as sales, data compiled by Bloomberg Intelligence show.

As a result, their net margin — which measures how much profit companies are squeezing from their revenue — has risen to a record high, according to Bank of America Corp. 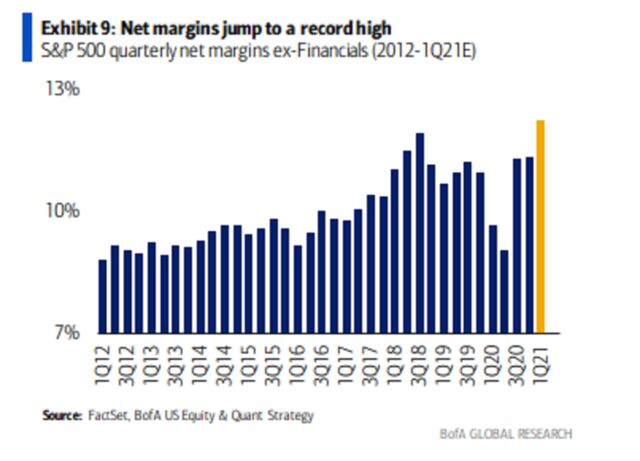 Executives mentioned “inflation” more than any time since 2011 during earnings conference calls last month, according to Bank of America. Warren Buffett joined the chorus two days ago, saying price increases are more intense “than people would have anticipated six months ago.” The billionaire added that as his Berkshire Hathaway Inc. boosted prices, customers have accepted them.

“To a fundamental analyst, inflation is called ‘pricing power,’” said Nicholas Colas, co-founder of DataTrek Research. “And it is very good for incremental corporate earnings.”

PPG Industries Inc. and Kimberly-Clark Corp. are among companies that have hiked prices or plan do to so soon. Almost three quarters of S&P 500 firms that have announced results expanded operating margins in the first quarter. Blended with analyst estimates for those yet to report, profits probably surged 46% to an all-time high of $46.90 a share. That’s 10% above the record set in 2018 of $42.79.

Not everyone is benefitting. A shortage of semiconductors, for instance, is creating pain for automakers, smartphone suppliers and video-game developers. Ford Motor Co. last week slashed its 2021 forecast, warning the chip scarcity will cut planned second-quarter production in half. By Bank of America’s count, inflation angst among corporate executives was most prevalent in the commodity, consumer and industrial sectors.

While government data showed March output costs and consumer prices posting the biggest increases in about a decade, Federal Reserve officials have played down the risk that inflation could get out of control, saying any boost won’t last long.

Comments from business leaders are “pointing to at the very least, ‘transitory’ hyper-inflation ahead,” Bank of America strategists led by Savita Subramanian wrote in the note. “Higher mentions of pricing, coupled with a record net margin, suggest inflation so far has been positive for corporate earnings.”