Surging commodity costs drove China’s factory-gate inflation to its highest level since 2008 in May, further adding to global price pressures.

The producer price index climbed 9% from a year earlier, following a 6.8% gain in April, the National Bureau of Statistics said Wednesday. The median forecast in a Bloomberg survey of economists was for a 8.5% increase. Consumer prices increased 1.3% from a year ago, missing an estimate of 1.6%. 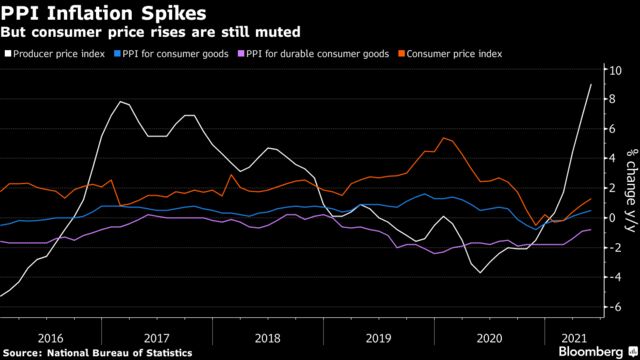 The producer price inflation “cannot be passed on to the consumer completely” and may only start to affect consumer inflation in the fourth quarter of this year, Iris Pang, chief economist for Greater China at ING Bank NV, said in an interview with Bloomberg TV. The latest Covid-19 outbreak in the southern province of Guangdong will dampen consumer demand in the coming months, while the recovery in overseas markets has just started, she said.

So far, the impact of higher metal prices has showed up mainly in upstream industries involved in the mining and processing of raw materials, while price increases in downstream industries like furniture and textiles have been minimal, according to an analysis by Bloomberg Economics.

The rally in commodity prices has been fueled by the global recovery, pandemic-induced supply shortages, and record stimulus by governments around the world.

The People’s Bank of China sees the inflationary pressures as transitory, in our view. It’s also mindful of the need to sustain support for an incomplete economic recovery. A rate hike isn’t likely anytime soon.

The pass through from PPI to consumer prices has been limited, given that the link between the two has weakened. Intense competition among smaller businesses, spurred by the rise of e-commerce, and weak domestic demand means China’s factories are absorbing rising input costs rather than passing them on to consumers at home.

Core CPI rose 0.9%, with most of the increase in consumer prices coming from non-food items. The almost 24% fall in pork prices undercut stronger price rises for most other foods.

Authorities have said PPI will likely continue to climb through the second quarter before moderating in the second half of this year. However, the central bank is likely to avoid hiking interest rates in response to the inflation data and also keep liquidity in the banking system tightly balanced, economists say.