(Bloomberg Intelligence) — RECENT EVENT REACTION: Apple is returning to the bond market, even with $196 billion of cash on hand, which we believe suggests the pace of shareholder returns is likely to rise to new highs. With 1Q returns exceeding $30 billion, and net cash $84 billion above its target, Apple’s near-zero weighted cost of capital provides ample firepower for potentially record-high buybacks in 2021. (02/01/21)

THESIS: Despite Apple’s aggressive capital-return policy, we expect its best-in-class financial flexibility and near-zero weighted-average cost of debt capital should continue, both key credit differentiators vs. investment grade technology peers. Even though Apple has returned more than $527 billion to shareholders since 2012, its cash balance of $196 billion still dwarfs the largest technology and internet peers: Microsoft ($132 billion), Alphabet ($133 billion) and Amazon.com ($68 billion).

Net cash has fallen to $84 billion from $153 billion in fiscal 2017, yet Apple’s Aa1/AA+ credit ratings remain stable as free cash flow climbs. Even with its increasing shareholder-return pace, achieving its cash-neutral target may take years. (02/01/21)

Credit Considerations
Credit Checklist
2. Apple Could Be Upgraded to AAA, But Strength Makes That “Meh” 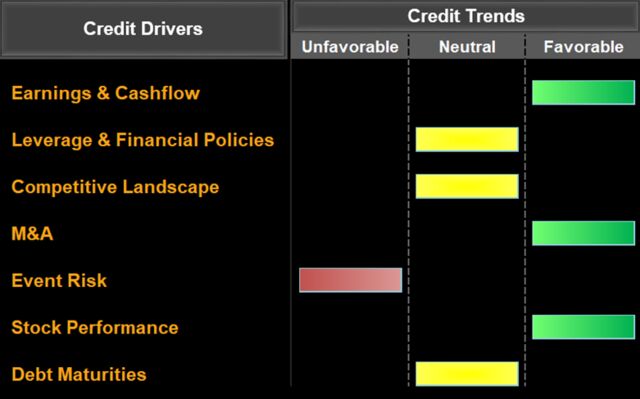 Apple’s strong Aa1/AA+ credit profile is supported by a diversified revenue base, enormous cash and free cash flow. Regardless of global coronavirus-related uncertainty, huge revenue and solid gross margin, coupled with nearly $80 billion of Ebitda and a well-telegraphed return of capital, suggest the credit story should remain stable. Even with considerable financial flexibility, and an equity-market capitalization of $1.8 trillion, use of cash for M&A is doubtful as regulatory scrutiny remains high. With few alternatives for cash, massive shareholder returns may persist.

With total debt of $112 billion, Apple’s ability to reach its cash neutral balance-sheet goal will be challenged over the next 24 months with cash balances of $192 billion, while pre-dividend free cash flow is expected to rise toward $75 billion annually. (11/04/20)

Apple may need to expand its annual shareholder returns to over $100 billion to meet its balance-sheet goals, in our view, even after returning almost $500 billion via buybacks and dividends since 2012. With our expectations of annual free cash flow rising above $75 billion in fiscal 2021, considerable excess liquidity is likely to persist. (01/08/21)

3. As Free Cash Balloons, So Too Must Returns

Apple’s capital returns have been large and are growing, yet may need to expand considerably more to reach its net-cash-neutral target over the next few years. Assuming limited M&A opportunities, as free cash flow approaches $80 billion, even if shareholder returns grow to $100 billion annually, it may take four years for Apple’s $79 billion net-cash position to approach zero. The company has returned $497.4 billion to shareholders since 2012. After returning $72.5 billion via buybacks and $14.1 billion through dividends in fiscal 2020, $56.4 billion of share-repurchase authorization remains.

Even with hundreds of billions of dollars of returns, balance-sheet strength is supported by $192 billion in cash, $81 billion in operating cash flow and $73 billion in free cash flow over the past 12 months. (01/08/21) 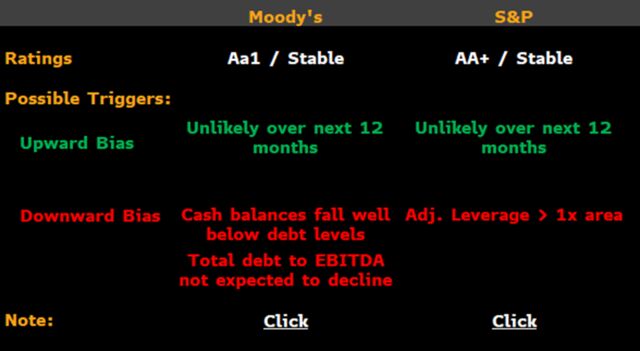 With $192 billion in cash, $79 billion in net cash and more than $73 billion in pre-dividend free cash, Apple’s credit profile remains stable within the AA category. However, with higher business risk and a more aggressive capital-return program, the company’s ratings trail that of AAA rated Microsoft. Both Moody’s and S&P have indicated that an upgrade in the near term remains unlikely. Over the past three fiscal years, Apple has reduced its net cash position to $79 billion from $153 billion, a $24.7 billion-a-year run rate. 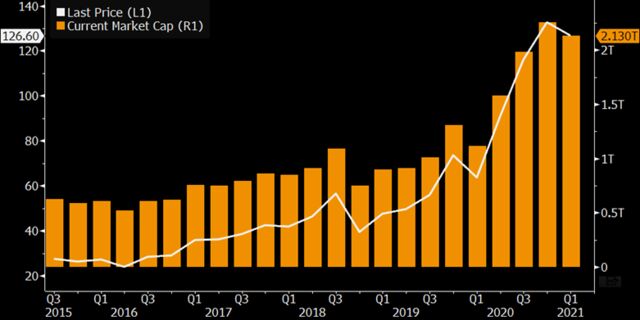 Apple’s stock price hit a previous high in May 2018, after Warren Buffett disclosed that Berkshire Hathaway purchased additional equity. Berkshire owns 1 billion shares of Apple, or a 5.9% stake valued at about $110 billion, according to Bloomberg Security Ownership data. “I clearly like Apple — we buy them to hold,” Buffett said on CNBC in May 2018, adding he’d “love to own 100%” of the company. (01/07/21)

6. Still the Biggest Cash Pile on the Tech Block 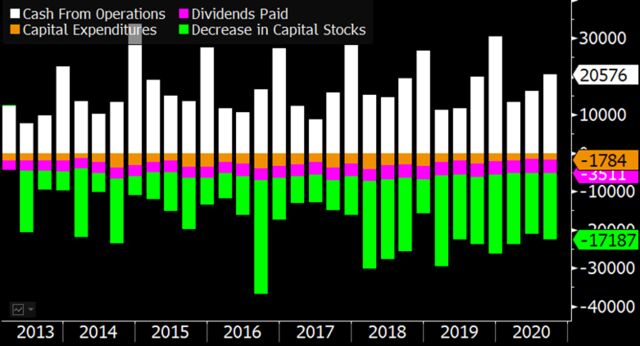 Apple’s industry-leading 4Q $192 billion cash pile provides more liquidity than the company requires, with the biggest question being what it will do with the excess. Apple has clearly indicated its goal of becoming net-cash-neutral, suggesting that with a debt balance of $112 billion it could cut cash by nearly $80 billion and still have a net cash position. Annual free cash that’s still expected to exceed $75 billion is likely to push out the company’s liquidity targets for multiple years.

Repatriation tax relief enabled Apple to forgo term debt in 2018, yet tight spreads and lower interest rates resulted in considerable issuance in 2019 and 2020. (01/07/21)

Consensus median net debt of $53 billion at the end of fiscal 2022 may be finally reflecting Apple’s current pace of shareholder returns, in our view. The European Commission ruled in 2016 that Apple was liable for 13 billion euros related to tax allocation of profit of its subsidiaries in Ireland. Apple appealed the decision, with a final ruling potentially taking years. As of September, the entire adjusted recovery amount, plus interest, was funded into escrow where it will remain, pending conclusion of all legal proceedings. In July, the General Court annulled the decision, potentially saving Apple billions of euros in tax payments. (01/07/21)

Apple’s balance sheet has the most cash, and most debt, among peers including Amazon.com, Microsoft, Alphabet and Oracle. With a weighted-average cost of debt capital near zero, Apple may continue to opportunistically borrow, in our view, amid record-low financing rates and with large upcoming maturities. (11/02/20)

Following a 4Q return of $22 billion in cash, consisting of $3.5 billion of dividends and $18.4 billion in share buybacks and share settlements, Apple’s unadjusted debt rose in fiscal 2020 even as operating cash flow set an annual record, as the company continued to tap the debt markets. Apple is making progress toward its goal of reaching a cash-neutral position “over time.” Shareholder returns have had an impact on the company’s sector-leading cash balance, which has fallen to $192 billion at the end of 4Q from a peak of $285 billion in 2017, yet liquidity remains far superior to its vast array of technology and internet peers.

Even though Apple ended 4Q with by far the largest cash balances — at $192 billion — among its largest technology and internet peers, it once again accessed the debt markets in August, bringing its total borrowings for 2020 up to $14 billion. Though additional cash isn’t needed, the ability to extend duration and lower average interest costs are the likely factors that continue to attract the company to raising more debt. Coupons from its most recent offering were 0.55-2.55%, with proceeds targeted primarily for incremental shareholder returns, in our view.

With Apple’s after-tax weighted average cost of debt capital at only 0.1%, and $50 billion of maturing debt through 2025, we anticipate the company to remain an active borrower, even as cash balances remain considerable. (11/02/20) 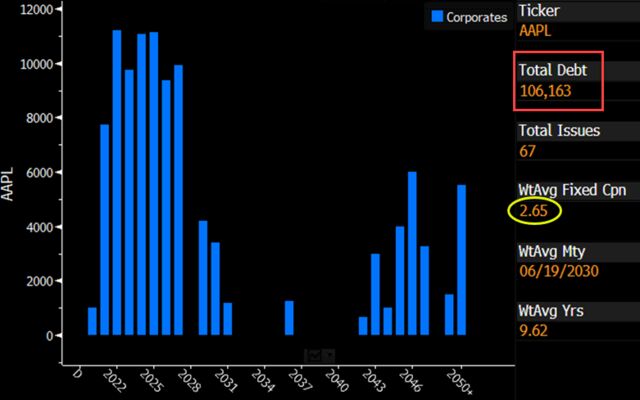 Even with cash in excess of $190 billion, Apple has remained an active borrower, with its weighted average cost of debt capital near zero. Access to capital remains ample and at a low cost, as highlighted by its August bond offering. Earlier in 2020, Apple raised $8.5 billion of debt with bond coupons ranging from 0.75% for three-year maturities to only 2.65% for bonds coming due in 30 years. As a result, total debt grew by $3 billion in fiscal 3Q and remained steady in 4Q at $112 billion.

With an average maturity of almost ten years, the majority of Apple’s bonds ($76 billion) will come due over the next decade, in addition to $5 billion in commercial paper and repurchase agreements. (11/02/20)

With Apple’s $1.8 trillion market capitalization — over 16x its total debt load — equity volatility has little impact on bond-trading levels as net leverage remains far in negative territory. Apple’s bonds, rated Aa1/AA+, are among the tightest in the corporate-bond universe, yet remain wider than Amazon.com and Alphabet due primarily to weaker trading technicals. (11/04/20)

11. It’s Not Fundamentals, It’s About Technicals 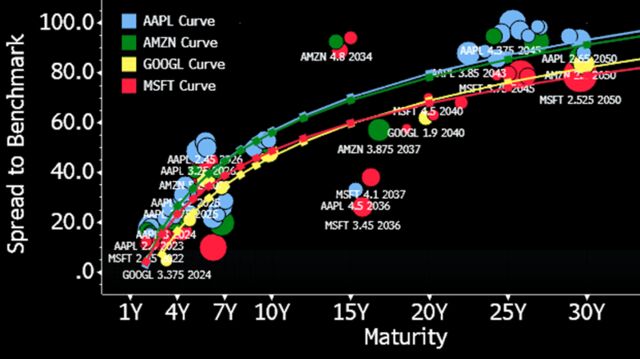 Apple, with over $100 billion of bonds and $112 billion of total debt outstanding, has the largest balance sheet among peers, likely resulting in relatively weaker technicals and mildly wider spreads. With one of the strongest credit profiles, highlighted by its Aa1/AA+ ratings, the company’s creditworthiness is unmatched by most. Trading technicals have weakened mildly over the past six months as the company surprisingly returned to the debt markets, borrowing $8.5 billion in May and $5.5 billion in August.