The bond market is signaling that in the matter of the Federal Reserve versus inflation, its money is on the US central bank.

Demand for inflation protection — as measured by yields on inflation-protected Treasury debt — keeps falling. The five-year expected inflation rate implied by those yields is back below 2.6%, down from a March peak of 3.76%. Meanwhile the market’s expected peak in the Fed’s policy rate remains below 4%, and long-dated Treasury yields have rebounded from levels that suggested a recession was in the cards.

“If inflation comes down to what breakevens are pricing today, then a soft landing is possible,” said Rick Rieder, the chief investment officer of global fixed income at BlackRock Inc., the world’s biggest asset manager.

Breakeven rates for Treasury inflation-protected securities, or TIPS, represent the market’s expectation for the annual inflation rate for the maturity of the debt. 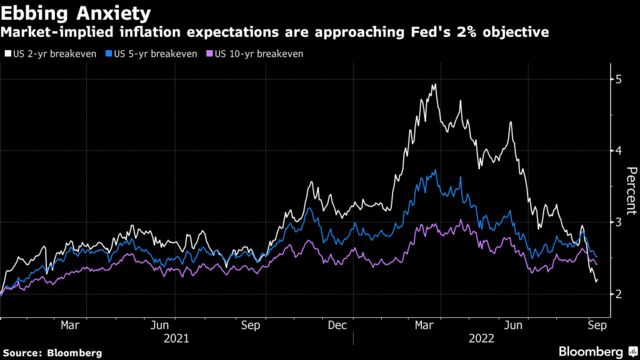 While commodity price trends help explain the drop in shorter-term breakeven inflation rates — the futures prices of crude oil and gasoline fell to the lowest levels since January this week — longer-term TIPS breakevens are back below 2.5%, even as CPI inflation was 8.5% in July.

That’s a vote of confidence in Fed officials including Chair Jerome Powell, whose latest public comments Thursday emphasized the importance of not allowing high inflation expectations to become entrenched with consumers. “The clock is ticking” on keeping those expectations in check, he said.

Powell’s comments largely cemented the view that the Fed will opt for another three-quarter-point rate increase on Sept. 21, the next decision date, bringing the total amount of tightening since March to three percentage points. Fed Governor Christopher Waller and St. Louis Fed President James Bullard, speaking Friday, also backed a larger hike. Fed officials customarily refrain from commenting during the week preceding a scheduled meeting, a period that has begun.

As recently as late August, a half-point rate increase was viewed as the likelier outcome, based on the pricing of swaps referencing Fed meeting dates.

Now it would take much weaker-than-expected August inflation data — to be released Tuesday — to revive talk of a smaller increase of 50 basis points. In July, the annual CPI rate slowed more than expected to 8.5%. Further deceleration is estimated for August, to 8.0%.

Even as swaps assigned more than 80% odds to a bigger September rate increase, the expected peak in the Fed’s policy rate — in March 2023 — remained below 4%. The swaps curve continues to price in a quarter-point rate cut from the peak level by the end of 2023, but as recently as a month ago it priced in a half point.

Consistent with that, this week’s increase in longer-dated Treasury yields — the 30-year bond’s exceeded 3.51% for the first time since 2014 — lessened the inversion of the yield curve, effectively downgrading the chances of a recession.

To be sure, next week’s monthly auctions of three-, 10- and 30-year Treasuries on Monday and Tuesday may create upward pressure on yields that could subsequently fade. Next week also brings August retail sales data Thursday and the University of Michigan’s survey-based measure of inflation expectations Friday.